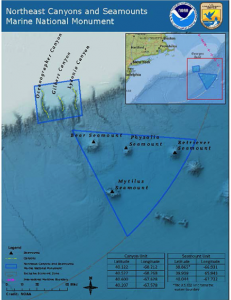 Located approximately 130 miles southeast of Cape Cod, the monument contains two distinct areas that showcase unique and vulnerable ecosystems. The monument has three canyons covering just over 941 square miles, and four seamounts (which are ancient extinct volcanoes) covering more than 3,970 square miles. In the entire Atlantic seamount chain, these four are the only that reside within the Exclusive Economic Zone (EEZ) of the United States. The canyons are home to many species of deep-sea corals, sponges and invertebrates that influence the production and distribution of fish such as tuna and sharks. The northeast does not have many ecosystems that are home to deep-sea corals, particularly not any as undisturbed as the seamounts are now. The seamounts rise up to 2,500 meters from the sea floor and are areas of immense upwelling that provide nutrients from the deep, cold water to the oceans’ surface. Together, the canyons and seamounts create a complex, productive ecosystem that has fascinated scientists for decades and continue to provide new knowledge, such as their home to the Atlantic puffin, which travels from main in the early spring to feed near the seamounts. Numerous whales also use these areas as feeding grounds, including the endangered sperm, fin, and sei whales. The president stated that this area will be jointly managed between the Department of Commerce (NOAA) and the Department of Interior (USFWS), and that agencies must generate a management plan for the area within three years. 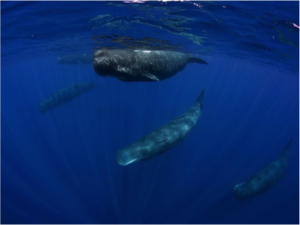 Many whales, including endangered Sperm Whales, use this region for feeding. Photo: Smithsonian Magazine.

Although navigation is not banned in the new monument, the president has declared that the following activities be prohibited:

President Obama used his authority to declare national monuments under the Antiquities Act of 1906. Prior to this proclamation, there were a total of 151 monuments in existence, ranging from historic structures to sites or objects of scientific interest.

Deep-sea corals located in the seamount region of the Northeast Canyons and Seamounts Marine National Monument. Photo: The Safina Center.