Lake Baikal: The Deepest Lake in the World Heading Towards Deep Trouble

Estimated at about 25 million years old and containing 20 percent of the world’s freshwater, Lake Baikal is nestled in a rather remote area of Russian wilderness (Skylarov et al., 2015).  This vast lake holds the title for the largest, deepest, and oldest freshwater lake on our planet. Unfortunately, the vastness of Lake Baikal might be the very thing that leads to its demise. While the people of Russia value the lake as a source of water, economic benefit, and cultural resource, they have been increasing the input of pollutants into the lake for years. Because of this pollution, Lake Baikal is showing disheartening signs of eutrophication and warming, as well as endemic species decline. 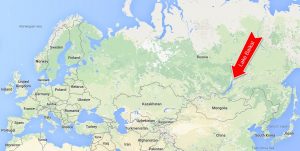 Geographic location of Lake Baikal in Russia. Image from http://earthsky.org/earth/what-is-the-worlds-deepest-lake

There is a misconception that seems to enter the minds of individuals as they look upon a large body of water. This misconception is that the water is endless and all encompassing, and therefore unlikely to be altered by any human influence. However, this could not be further from the truth. All bodies of water are sensitive to anthropogenic, or human, influence and destruction. This destruction is manifested in a major way through eutrophication – the increased input of nutrients into a body of water that in turn leads to increased plant and algae growth and eventually, sedimentation. Oxygen depletion is a result of increased nutrient input leading to plant growth. While this eutrophication can be a natural process, human action goes a long way to expedite the process. Warmer water holds less oxygen, therefore, the effects of eutrophication-driven oxygen depletion in Lake Baikal waters are exacerbated when in conjunction with climate change.  New research has shown that over a 60-year period, water surface temperatures have increased 2.4 °C in the summertime (Izmest’eva et al., 2015). Rising temperatures lead to the thawing of  permafrost surrounding Lake Baikal. This melting releases industrial pollution including polychlorinated biphenyls (PCBs) and dioxins into the air and watersheds surrounding Lake Baikal (Moore et al., 2009). These toxins found their way into the permafrost from surrounding industrial plants and a pulp mill (Moore et al., 2009).This increased temperature can be also translated into increased danger for the organisms that call Lake Baikal home.

For the organisms living in Lake Baikal, there are various implications that come with rising temperatures, pollution and eutrophication. Industrial chemicals and pollution affect Baikal seals as they are predators at the peak of the food chain in the lake, and therefore, prone to the build-up of contaminants in their blubber (Nakata et al., 1995). The increased nutrient and chemical input has also led to toxic algal bloom formation in shallow bay areas on Lake Baikal (Belykh et al., 2015). Algal blooms result in hypoxic conditions which lead to fish kills, as well as resulting in a loss of indigenous phytoplankton that are better food sources for planktivorous fish and zooplankton.

Lake Baikal is a unique gem in our natural world. Aside from its aesthetic beauty, the lake also offers valuable biological, cultural, and economic contributions to society. In terms of biological contributions, Lake Baikal offers the opportunity to examine endemic species and their adaptations to deep freshwater living in lake environments. Additionally, sediment composition and current plant animals living in Lake Baikal provide a sneak peek into the history of the lake along with potential evolution of species. This is but one of the many unlisted contributions Lake Baikal makes to our world. It is for these reasons that the preservation of Lake Baikal is an absolute necessity, to ensure that the largest and oldest lake in the world flourishes and remains healthy for many generations to come. 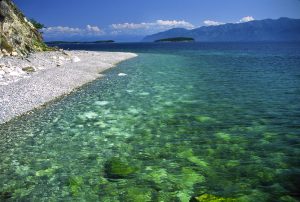 The crystal clear waters of Lake Baikal. Image from http://www.lifefoc.com/photos/server3/lake_baikal.jpg