Winter flounder spawning offshore in the southern Gulf of Maine

Winter flounder (Pseudopleuronectes americanus) are small-mouthed flatfish native to the east coast of North America, ranging from Labrador to Georgia. They are right-eyed flounder, meaning that as adults, both eyes are on the right side of their head and they lie on their left side on the substrate (Figure 1). Like other flatfishes, winter flounder change color to mimic the substrate they are laying on. These color changes are highly variable, ranging from almost black on dark mud to pale on light sand. 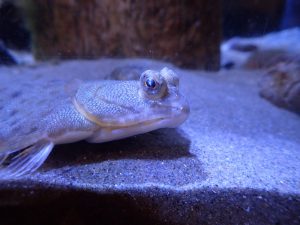 Winter flounder are harvested both recreationally and commercially. In the United States, they are managed as three stock units: Gulf of Maine, Southern New England/Mid-Atlantic, and Georges Bank. While winter flounder from the Georges Bank stock spawn offshore, those from the Southern New England and Mid-Atlantic regions typically migrate into coastal bays and estuaries to spawn in early spring. It was assumed that winter flounder from the Gulf of Maine stock underwent similar seasonal migrations due to their proximity to the coast, but recent studies show that this may not be the case.

During the spring of 2016, Dr. Elizabeth Fairchild from the University of New Hampshire conducted a study on winter flounder to determine whether they are spawning in deep, offshore waters in the southern Gulf of Maine (off New Hampshire and Massachusetts). She collaborated with commercial fishermen and chose three study sites where winter flounder have been caught offshore during the spawning season: the southeastern section of Jeffreys Ledge, Bigear (located southwest of Tillies Bank), and the southwestern corner of the Stellwagen Bank National Marine Sanctuary (Figure 2). 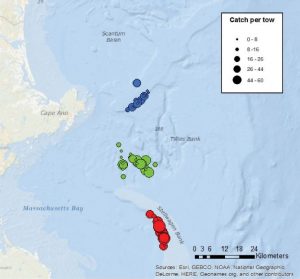 Figure 2. Locations of the three offshore sampling sites in the Gulf of Maine: Jeffreys Ledge (blue), Bigear (green) and Stellwagen Bank (red). The circles are proportional to the relative abundance of sexually mature winter flounder caught during the survey (from Fairchild 2017).

Each site was sampled biweekly over the course of two months (mid-March to mid-May) during the winter flounder spawning season using a groundfish bottom trawl net (Figure 3) deployed from a contracted commercial fishing vessel. At least five 30-minute tows were conducted on each sampling day. The winter flounder that were caught were tagged externally, and the sex and reproductive stage of the fish were examined. Females were classified as developing, ripe, running ripe, spent or recovering. The males were identified if they released milt (fluid containing sperm). If the sex was not distinguishable externally, the fish was classified as unknown. Flounder of unknown sex greater than 28 cm in length were considered mature and those less than 28 cm were considered immature. 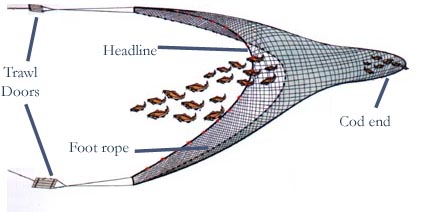 Winter flounder caught throughout the course of the survey were spawning in the vicinity of all three sites. Pre-spawn females were frequently caught during the first half of the sampling period but as the spawning season progressed, females commonly showed signs that they had recently spawned. Due to the distance of the sampling sites from shore (~15-22 km), it is unlikely that the fish had enough energy to migrate to bays or estuaries along the coast in their reproductive state.

At Jeffreys Ledge, the abundance of winter flounder decreased by May suggesting that the fish migrate elsewhere after spawning. The female flounder caught throughout the survey at Bigear were primarily in the pre-spawn, developing stages indicating that they may be migrating through Bigear to a nearby spawning location. The abundance of winter flounder caught at Stellwagen Bank remained high throughout the course of the survey. Females caught early in the sampling period were predominately ripe with eggs. Post-spawn, spent females became more common later in the spawning season. Females in the pre-spawn, developing stages were not caught at Stellwagen Bank until early May indicating that this area has a longer spawning season than the two northern locations.

For management purposes, NOAA Fisheries currently classifies the Essential Fish Habitat (habitat needed for a species to survive and reproduce) of winter flounder in Southern New England/Mid-Atlantic and the Gulf of Maine as water 5 meters or less in depth. This study shows that winter flounder are spawning in deeper, offshore waters in the southern Gulf of Maine. Further work is needed to understand the offshore spawning behavior and habitat of winter flounder to support the proper management of the species.