What’s for dinner? Chinook salmon transition to feeding at sea

Everyone knows that life changes are hard. Moving to a new home, getting a new job, and changing your diet are challenges for all of us, including fish! Salmon species around the world undergo massive changes to their bodies and behaviours as they leave the streams they were born in and find their way to the ocean. Their home changes from fresh to saltwater, and their job is to find new, high-quality food as soon as possible.

Timing is everything. When a juvenile salmon enters the ocean, the ocean conditions during that time affect the abundance, quality, and availability of prey that they encounter. Salmon are generalist feeders, taking anything they can get including insects, krill, and crab larvae, but what they need to grow quickly are young-of-the-year marine forage fish species, such as anchovies. Growing quickly matters – larger fish have a better chance of surviving to adulthood, and the faster salmon can grow the better they can avoid predators, and be more efficient capturing prey.

Favourable ocean conditions are cool with coastal upwelling of nutrient-rich waters, with a river plume created from the spring freshet run-off serving to aggregate prey. Off Willapa Bay in coastal waters near the mouth of the Columbia River, researchers studied ocean conditions, prey availability, and subyearling Chinook salmon (Oncorhynchus tshawytscha) growth to understand what is needed for the salmon to be successful (Litz et al. 2017, Figure 1). 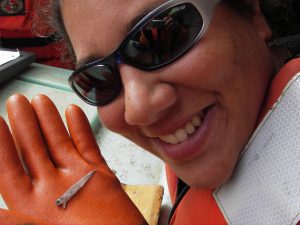 They trawled for prey items and juvenile salmon throughout the spring and summer, then analyzed salmon stomach contents. As a complementary approach to traditional gut content analysis, the authors also measured fatty acids and stable isotope of salmon muscle tissue to document the shift in diet from zooplanktivory (eating microscopic animals) to piscivory (eating fish).

The authors found many different types of fish and invertebrate prey were available in the spring, including amphipods, smelt, and sole species, but in low numbers. By the late summer, the diversity of prey items was less but occurred at much in higher densities, dominated by the Northern Anchovy (Engraulis mordax), an important prey item for salmon (Figure 2). 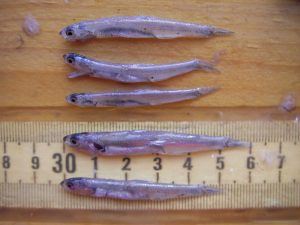 Based on the results of the study, it was determined that most salmon were considered piscivorous (>50% of their diet was made up by fish) by August or September. The salmon grew the fastest and were in the best condition (based on a length-weight relationship) when anchoives were most abundant.

In the life and survival of salmon, the consequences of not growing fast enough are severe. Smaller fish may have more competitors and predators, and are more susceptible to pathogens. Larger fish are able to build up energy stores to survive their first winter at sea. The strength of the whole year class depends on these critical first months at sea. After 2-4 years, when the juveniles have grown into adults, they undergo the long journey back to their natal streams where they will spawn and die, providing the nutrients needed for their young to survive. The year classes included in this study as juveniles were largely successful in reaching adulthood, with over 165,000 fish returning to the river each year.