What do groundwater seeps and brown trout have in common? 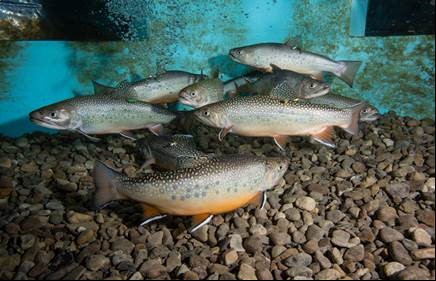 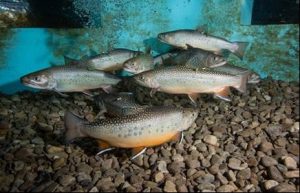 Imagine diving into a cool body of water after exercising or working in hot weather.  This is an example of behavioral thermoregulation—changing your actions in order to influence your body temperature. Freshwater fish do the same thing because water temperatures can vary dramatically at different locations within a stream (for a review, see Caissie 2006). As streams get uncomfortably warm from seasonal and global changes, coldwater specialists such as trout may behaviorally regulate their temperature by seeking refuge in cooler patches of water (i.e. a thermal refuge). Examples of thermal refugia for trout can be deep pools, sections of stream shaded by dense canopy, or upwelling zones where ground water pushes up through the streambed. Just as humans flock to lakes to beat the summer heat, trout seek deep, shaded pools to cool off.

Unfortunately, thermal refugia may not doubly function as feeding, spawning, or cover habitat so trout may have to leave the thermal refuge in order to eat or reproduce. This movement between habitats within the stream can be influenced by other members of the fish community; especially invasive trout.

Some invasive trout have similar thermal, feeding, and spawning habitat requirements as native trout. As a result, invasive trout may influence the distribution of native trout through competition for access to the different types of habitat. Researchers from the United States Geological Survey Leetown Science Center in West Virginia hypothesized that both increasing water temperatures and the presence of invasive brown trout would modify native brook trout distribution and movements between a thermal refuge and feeding habitat.

To test their hypotheses, the researchers set up two experimental 7.6 m stream reaches made of adjoined fiberglass aquariums.  One end of each “stream” had a feeding station and the other end received water that was consistently 6-9 °C below the ambient water temperature to simulate an upwelling zone.  As a control, one “stream” was stocked with 10 large (>300mm) hatchery-raised brook trout. To test the effect of an invasive species, the second stream was stocked with five large hatchery-raised brook trout and five large hatchery-raised brown trout. To assess the impact of increasing stream temperatures under a projected climate change scenario, the trout were exposed to six trials of four ambient temperatures (14, 17, 20, and 23 °C).  The team measured how evenly distributed or clustered the trout were in the experimental stream (termed spatial evenness) using visual observations through fixed windows in the sides of the stream aquaria.  They also used underwater cameras to record movement between habitats. 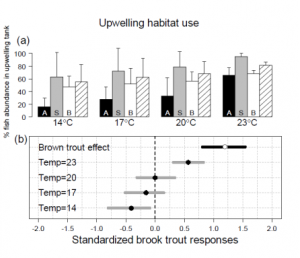 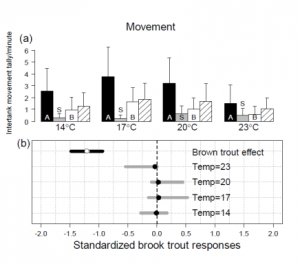 Brook trout that shared tanks with brown trout (grey bars) moved between habitats far less than the controls (black bars). However at 23 °C , all fish reduced their movements.

What do groundwater seeps and brown trout have in common?  The results of this experiment suggest that both are important factors in shaping brook trout distribution. The researchers found that brown trout reduced spatial evenness and restricted brook trout movement at all temperatures. In contrast, the control brook trout moved freely and evenly between habitats. As temperatures increased, both populations spent more time in the upwelling zones, but brook trout that shared the stream with brown trout exhibited even greater use of the upwelling habitat than the controls.  These results demonstrate a negative impact of brown trout and increasing water temperatures on brook trout distributions in an experimental stream, and suggest that wild brook trout populations would continue to benefit from invasive trout removal, as well as protection and cultivation of thermal refuge habitats.