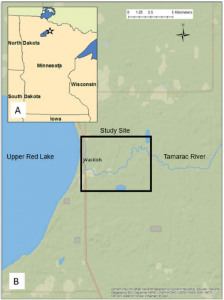 Figure 1. Location of the study site on the Tamarac River, a tributary of Red Lake in Northern Minnesota. (Reproduced from Graham et al. 2017).

The sustainability of fish populations relies on the ability of adult fish to at least replace themselves. To do so, they must spawn successfully, and this requires suitable spawning habitat. Spawning habitat is vital to successful reproduction, without it, few eggs are deposited and there is low survival among those that are. Even fewer will survive to hatch and reach adult stages.

Identifying spawning habitat can help protect fish populations such as Walleye and ensure their survival. Walleye are an important recreational sportfish throughout much of their range, which extends from Northern Canada to the Southeastern United States. They inhabit freshwater lakes and rivers completing upriver migrations in early spring to spawn.

Traditional methods of mapping river habitats involve numerous hours in the field assessing river substrate within certain river reaches (eg. points, transects or grids). The extensive time and effort this requires usually means that entire rivers can not be mapped; instead certain sections are mapped and unmapped areas have to be inferred from mapped sections.

New methods using side-scan sonar and GIS (Geographic Information System)/GPS (Global Positioning System) technologies are emerging that are more cost effective and require less time in the field than traditional methods, while providing the ability to map entire rivers. While side scan sonar has been used to some extent, the accuracy of this method has rarely been assessed. To address this, a team of research 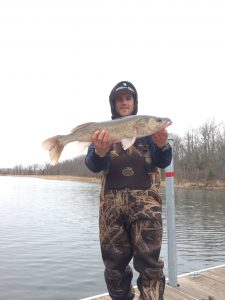 ers led by Jake Graham from the Department of Biology at Bemidji State University in Minnesota evaluated the accuracy of river habitat maps produced using side-scan sonar. This was done by mapping a 10.8 km section of Walleye spawning habitat in the Tamarac River located in Northern Minnesota.

Graham and his team made use of a recreational grade sonar to collect images. The sonar was mounted to the bow of a boat and collected images from both sides of the river as the boat slowly navigated downstream. Overlapping sonar ‘snapshots’ were taken along with GPS waypoints to obtain a continuous image of the riverbed.

Using GIS software, they were able to match up the river snapshots with the help of GPS waypoints into one continuous image and assess whether the substrate was suitable or unsuitable for Walleye spawning. 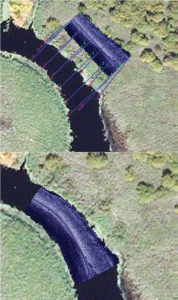 Traditional riverbed classification methods were then used to assess the accuracy of the sonar images. Several reference points were chosen where substrate was classified as either suitable (particle diameter >= 2mm) or unsuitable (particle diameter <2mm) walleye spawning substrate and marked with a GPS waypoint. These waypoints and substrate types could then be compared to the sonar images to assess their level of accuracy in capturing substrate type. Overall Graham and colleagues mapped over 10.8 km of the river using 293 sonar snapshots representing 315,275m2 of riverbed. An estimated 26,398m2 (~8.4%) of the total river bed was classified as suitable spawning substrate. 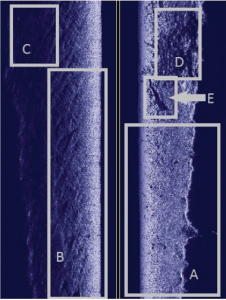 Side-scan sonar provides an accurate, less costly alternative to traditional mapping techniques. In this case the full 10.8 km was mapped in just under 2 hours in the field. However, a few drawbacks still exist with the use of this method in mapping habitat. As Graham notes “The largest challenge in this study was trying to define where substrate transitioned from suitable to unsuitable in sonar images. In many cases there would be areas that were clearly suitable and areas that were clearly unsuitable adjacent to each other but the transition was gradual, and determining where exactly the transition occurred was difficult.” In addition, manual processing of the images in the lab was time consuming. However, new sonar video processing technologies are emerging that can aid in speeding up this process in the future. The accuracy of the images was relatively high when classifying habitat simply as suitable or unsuitable for Walleye spawning. Side scan sonar provides Walleye managers with a new, cost-effective, accurate tool to map spawning habitat and aid in the protection of Walleye populations.