Oyster reefs are dense colonies made up of thousands of individual oysters attached to hard substrate (Figure 1). Because of their complex structures, oyster reefs provide important habitat for a variety of fish and invertebrates species for spawning, foraging and refuge. Many commercially and recreationally important species utilize oyster reefs along the Atlantic and Gulf coasts of North America including red drum (Sciaenops ocellatus), blue crabs (Callinectes sapidus), and striped bass (Morone saxatilis). Oysters are also an important food source in coastal areas. For example, the eastern oyster (Crassostrea virginica) has historically supported an extensive commercial fishery from Nova Scotia to the Gulf of Mexico.

In addition to habitat, oyster reefs provide many ecological and economic benefits in coastal bays and estuaries. The reefs act as breakwaters, protecting shorelines and beds of aquatic vegetation from erosion by buffering them from wave action. Oysters are also effective filter feeders, feeding on phytoplankton and organic matter in the water. A single oyster can filter 189 liters (50 gallons) of water in a day. As they filter feed, oysters remove algae, suspended sediments, and excess nutrients from the water, greatly improving water clarity and quality.

Since the early 1900s, oyster reefs have experienced a sharp decline.  It is estimated that 85% of oyster reefs have been lost worldwide.  These declines have been attributed to unsustainable harvesting, siltation, and diseases caused by protozoan parasites Dermo (Perkinsus marinus) and MSX (Haplosporidium nelsoni).  As a result, large scale oyster reef restoration projects are taking place in many estuaries along the Atlantic and Gulf coasts.

Reef restoration requires hard surfaces for oysters to settle on. Oysters begin their lives as free-swimming larvae. When they locate an appropriate habitat, they will permanently attach themselves to hard substrate such as rocks or shells where they will spend the rest of their lives. Once they are attached, they are known as spat (Figure 2). Many restoration projects use recycled oyster and clam shells as hard substrate. After the spat settle, the “spat-on-shell” are deposited on reef sites where they will grow into adults. 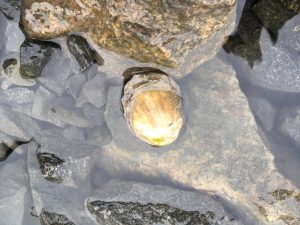 Figure 2. Oyster spat on a rock. Photo by Steve Luell.

Accurately sampling fish and invertebrate communities to evaluate the success of restoration projects can be difficult due to the limitations of sampling gear that can be used on this complex habitat. As a result, non-invasive approaches are being developed to monitor these projects. In May 2015, a team of researchers led by Shannon Ricci from North Carolina State University evaluated the use of passive acoustics to monitor oyster restoration sites by listening to sounds produced by organisms living on the reefs.

Oyster toadfish (Opsanus tau; Figure 3) are common residents on oyster reefs in estuaries along the Atlantic coast from Maine to Florida. They are voracious predators that feed on crabs, worms, small fish, and anything else they can fit in their large mouths. Toadfish are also very vocal. They use muscles attached to their swim bladders (gas filled organs used to control buoyancy) to produce sounds. During the spawning season, the males will emit a loud call that sounds like a foghorn or boatwhistle to attract mates. 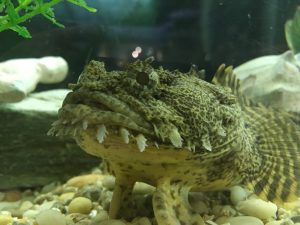 To listen for toadfish calls, the researchers placed hydrophones (underwater microphones) at eight oyster reefs in the Harris Creek Oyster Sanctuary on the Eastern Shore of Maryland (Figure 4). The recording systems were set to record sound for two minutes in 30 minute intervals for the duration of 26 days. The study was conducted in late spring to coincide with the beginning of the oyster toadfish spawning season. 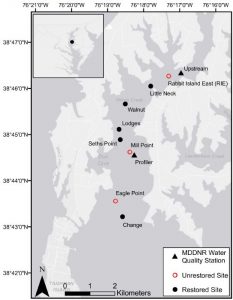 Figure 4. Locations of the study sites in the Harris Creek Oyster Sanctuary. The black circles represent sites that were restored with oyster spat settled on shells. The red circles are reef sites that have not been restored and the black triangles are water quality stations monitored by the Maryland Department of Natural Resources (from Ricci et al. 2017).

Over the 26 day deployment, the hydrophones recorded about 1.2 million mating calls between the eight study sites. The researchers found that the toadfish call rate was initially low, but it increased as the toadfish returned to the reefs from their deep overwintering areas in the Chesapeake Bay. Throughout the study, call rates increased rapidly after sunset and slowed down significantly before sunrise, though they continued to call throughout the day. The call rates also differed between the restored and unrestored reefs. The restored sites averaged almost twice as many calls as the unrestored sites. Three of the restored reefs (Change, Little Neck and Seth’s Point) averaged about 80 to 110 calls per minute, whereas one of the unrestored reefs (Rabbit Island East) only averaged around 20 calls per minute.

Oyster reefs are important spawning habitats for oyster toadfish and other reef fishes. The increased call rates at the restored reefs may be indicative of sufficient structure for reef species to use for nesting and refuge. Passive acoustics is an emerging, non-invasive method that can be used to monitor the health of oyster reefs.