Alewives (Alosa pseudoharengus) and blueback herring (Alosa aestivalis), collectively known as river herring, are small, silvery fish native to the east coast of North America. They are anadromous, meaning they spend most of their lives in the ocean and migrate into freshwater to spawn. River herring populations have experienced a sharp decline due to a multitude of factors including overfishing and the loss of spawning habitat due to dams, culverts and weirs blocking their migratory routes. 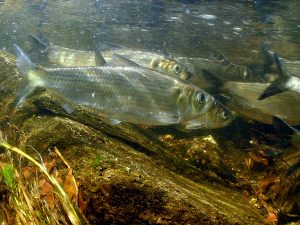 During the spring spawning run, alewives typically are the first of the two species to enter freshwater and begin to spawn about three to four weeks before blueback herring. Alewives prefer to spawn in slow moving waters while blueback herring prefer spawning over rocks and gravel in faster currents. The status of river herring spawning stocks are mainly determined by spawning run counts at fish ladders or lifts. These counts are typically done visually or by using electronic fish counters, though these methods have their limitations. Visual monitoring can be affected by murky water and glare. The accuracy of electronic counters has been found to decrease when large numbers of fish are ascending through the fishway simultaneously. Both methods also depend on the efficiency of the fishway (i.e. the proportion of fish that successfully pass through) as these narrow, man-made structures may discourage some fish from continuing their upstream migration.

In the spring of 2014, a team of researchers led by Dr. Matthew Ogburn, from the Smithsonian Environmental Research Center, evaluated the use of imaging sonar to count migrating river herring on their spawning run in the Choptank River on the Eastern Shore of Maryland. The site they chose was upstream from where the Maryland Department of Natural Resources (MD DNR) last conducted spawning run counts in 1972 and 1973. They deployed a dual-frequency identification sonar (DIDSON) acoustic camera in the water next to the shoreline and aimed it across the river. Plastic fencing was placed in the water along the banks to corral the migrating fish within the sonar’s field of view (~ 10 m) and the sonar unit was set to record for 10 minutes every hour.

Figure 2. Location of the study area in the Choptank River. The grey circle is the sonar site, the grey triangle is the location where the Maryland Department of Natural Resources last conducted spawning run counts in 1972 and 1973, the rectangle is the electrofishing sampling area, and the black square is the location of a US Geological Survey weir and stream gauge (from Ogburn et al. 2017).

Imaging software was used to process the sonar files and fish between 200-350 mm (the average size range of adult river herring) were counted. Once a week, the researchers used electrofishing gear to monitor the species composition downstream of the sonar station. They found that river herring made up almost 80% of the fish within the 200-350 mm size range. Sub-samples of river herring were also collected from the electrofishing sampling to monitor changes in the sex and age composition of the run. For both species, the run was primarily comprised of males. By examining the spawning marks on the scales, they found that about 55% of the river herring had migrated into freshwater several times during their lives to spawn.

Based on the sonar imaging and electrofishing sampling, it was estimated that about 581,000 alewives and 726,000 blueback herring returned to spawn in the Choptank River in 2014. This emerging technology allows researchers to count migrating fish without having to rely on narrow fishways. Imaging sonar is a new method that can be used to establish river herring monitoring programs in smaller rivers and tributaries.