When salmon are looking for mates, do the classic clichés ‘bigger is better’ and ‘first come, first serve’ apply? Sexual selection and mating strategy theory tells us that larger males should outcompete smaller males, and that those which reach the spawning grounds first should settle in preferred habitats. Dr. Cédric Tentelier and colleagues tested these questions on a spawning Atlantic salmon population in the Nivelle River, France (Tentelier et al. 2016).

The research group had eight predictions: (1) males with better habitat in their home range would get more mates, (2) and therefore more offspring, (3) the relationship between habitat quality and mating/reproduction should be strongest when females are aggregated together but spawning at different times, (4) females with better habitat in their home range would have more offspring, (5) higher quality habitats would be colonized first, (6) males will move around more than females, (7) larger males will outcompete smaller males for high quality habitats, (8) and therefore smaller males will be forced to move around more.

Salmon build nests on the river bottom called redds in which they lay their eggs. Habitat was considered to be of high quality for nest building and juvenile survival if it was near a riffle with pebbles 16-64 mm large, with water depths of 20-50 cm and water velocities of 35-65 cm/s. The research was conducted over two years. The first study year (2009-2010), 15 females and 17 males were radio-tracked in relation to 50 redds, and the second year (2010-2011), 45 females and 46 males were tracked in relation to 100 redds. Fish were tracked daily through the 13 km study zone allowing for thorough quantification of male/female and fish/redd encounters. Fish movements were quantified using the shortest portion of river which encompassed 50% of an individual’s daily positions.

In the first year they found redds were more aggregated but were dug over a wider range of time than in the second year, allowing for large males to maintain territories where they could visit multiple females. To determine if such large territorial males were more successful in siring offspring than smaller roaming males, 1677 fry in the spring of the first year and 1350 fry in the second year were electrofished (Figure 1) and genotyped to determine parentage. 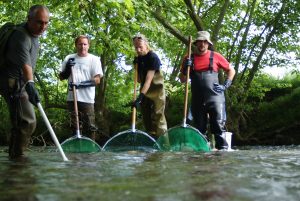 From these data, the researchers found: (1) males with better habitat in their home range encountered more females and active redds, (2) and sired more offspring; (3) the positive effect of habitat quality on number of offspring was stronger in the first year when females were aggregated but spawning at different times; (4) females with better habitat in their home range did have more offspring; (5) higher quality habitats were colonized first, but only for males in the first year and females in the second year; (6) males moved around more than females in the first year only; (7) large males did not outcompete smaller males for high quality habitats, (8) nor did smaller males move around more.

You can learn more about the UMR ECOBIOP (L’Unité mixte de recherche/The Join Research Unit Behavioural Ecology and Fish Population Biology) lab on their website, blog, or on twitter.