In the absence of fortune-telling, how can one predict the long-term consequences of habitat restoration efforts for fish?

Fish habitat restoration is a major focus around the world, taking many different forms such as dam removals, improving water quality, and even constructing new habitat.  In the Great Lakes specifically, the construction of artificial reefs in the Huron-Erie corridor (HEC) has been a recent, large-scale endeavor to improve spawning success of multiple native fish species (http://habitat.fisheries.org/evolution-of-artificial-reefs-in-the-great-lakes/).  These new reefs are being constructed in regions where large amounts of natural, historical habitat were destroyed in the early 20th century. From these efforts, post-construction reef monitoring has emerged as a key feature to improving and maintaining reef function.  Utilizing genetic analysis provides a new approach to monitoring the long-term success of these reefs for building local fish stocks.

One possible concern with habitat restoration efforts, and specifically habitat construction, is that only a small number of fish will be attracted to the new habitat, and the resulting young will have lowered genetic diversity.  Known as the founder effect, this decreased genetic variation can have persistent negative effects on the population as a whole; reduced variation can lead to limited adaptability to changing future conditions and increase the chance of inbreeding.   Furthermore, the attraction of the newly constructed habitat could pull small populations away from historical habitat, hurting these patchy populations that may maintain a large degree of natural genetic diversity.  Genetics can tell us which populations contributed to spawning, and subsequently whether reef creation might be hurting other populations in the Great Lakes. 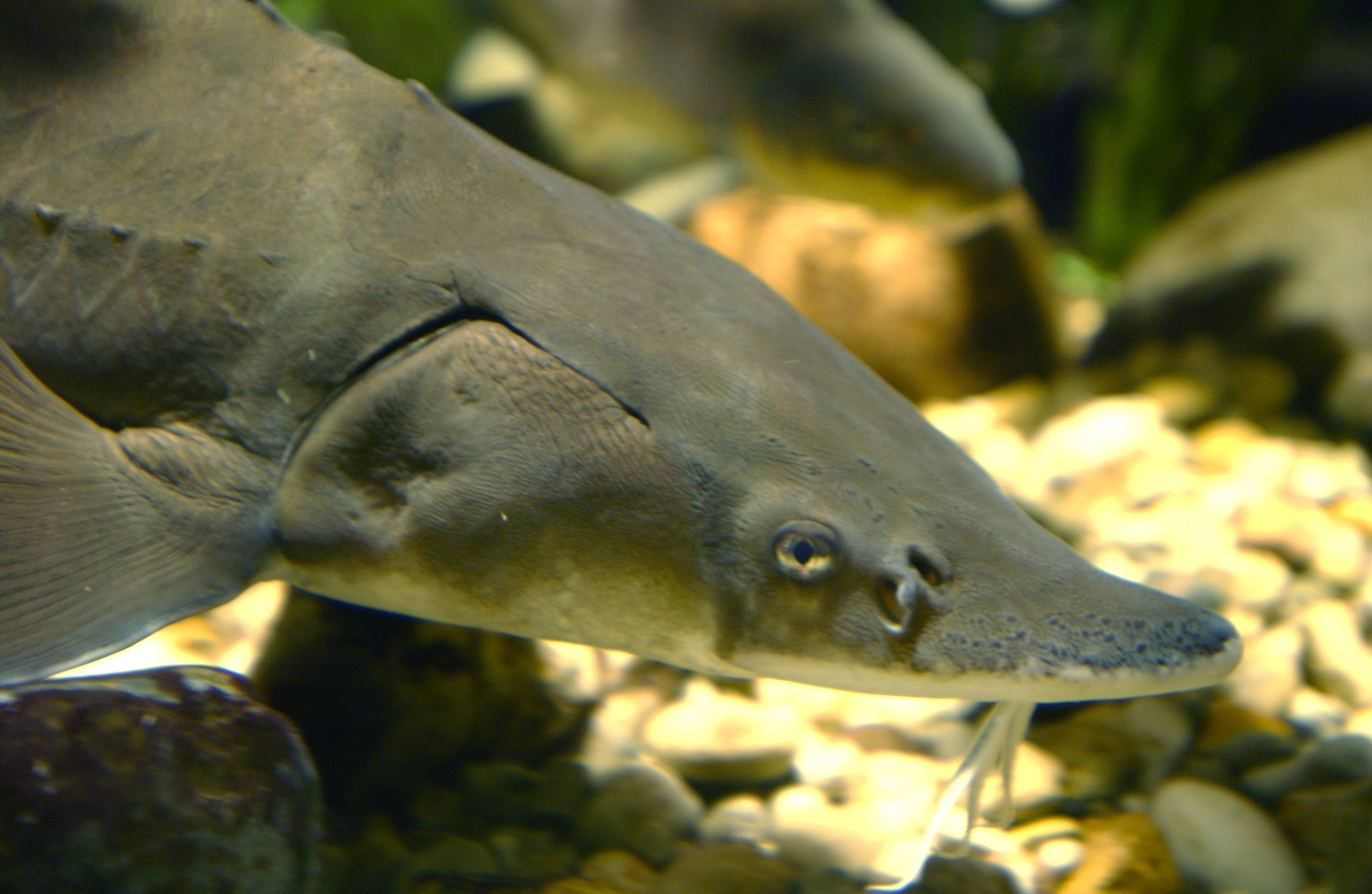 Marranca et al. (2015) introduced the use of genetics to assess the long-term implications of reef construction in the HEC on Lake Sturgeon Acipenser fulvescens, a long-lived species that currently persist at just 1% of their historical population size in the Great Lakes.  Researchers used genetic testing on Lake Sturgeon larvae from three artificial reefs in the HEC (Fighting Island, Maslankas, and Middle Channel; rectangle on map below), representing over 7,300 m2 of spawning habitat, to determine what source populations were actually breeding on the new habitat and whether the founder effect was occurring after this habitat construction.

Results from the Marranca et al. (2015) study seem to suggest that the new populations on the artificial reefs are doing reasonably well.  The two closest source populations (Detroit River, St. Clair River) contributed the vast majority of spawners to the new reef, an unsurprising finding given Lake Sturgeon tend to remain close to their preferred spawning grounds.  Researchers also deemed there were a sufficient number of breeders on each of three reefs to prevent inbreeding and, despite some tests suggesting the occurrence of the founder effect, overall genetic diversity on the new reefs was comparable to the two source populations. 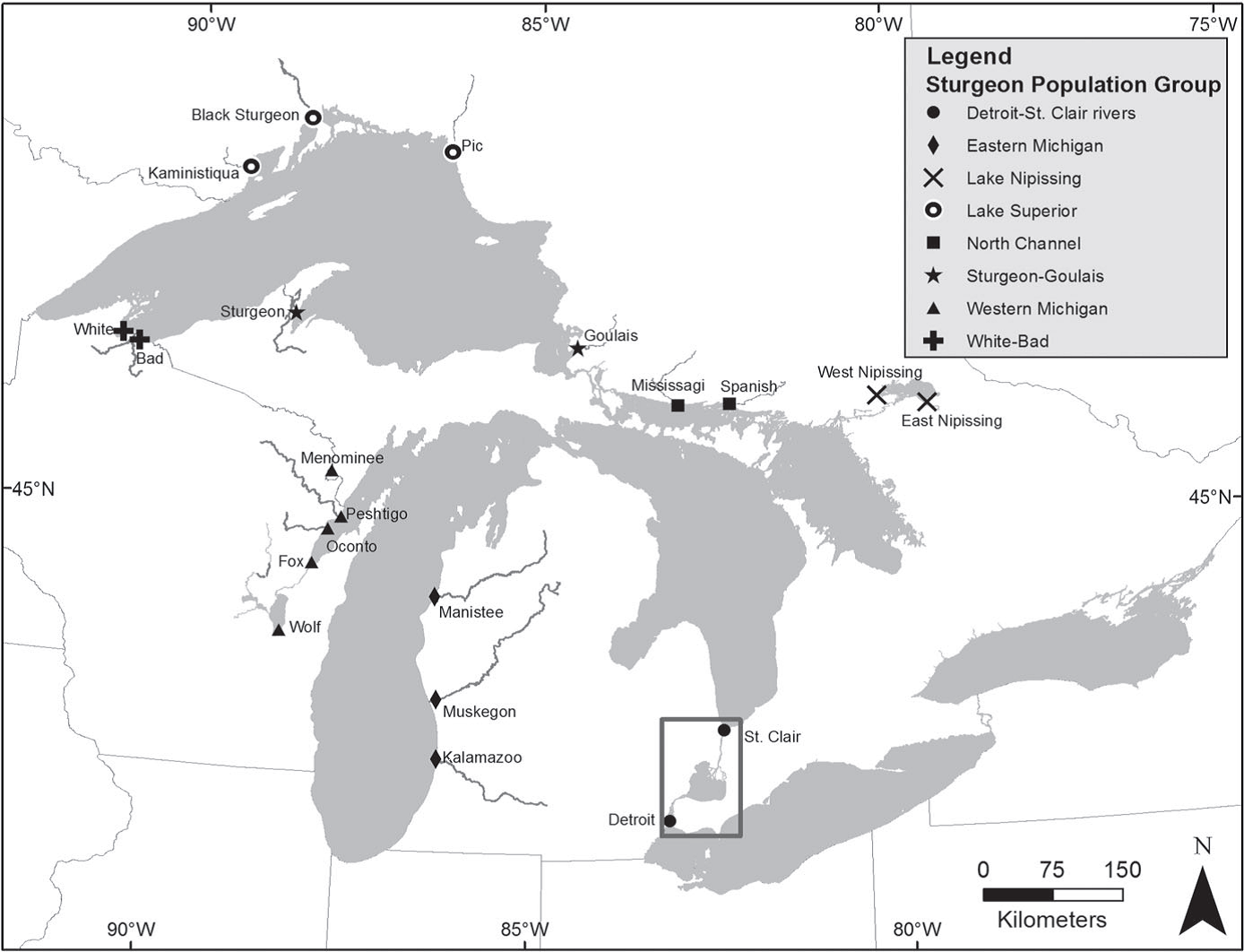 Map of potential source populations for the breeders on the HEC artificial reefs, indicated by the box (obtained from Marranca et al. 2015)

These findings demonstrate the potential of these reefs to produce healthy populations of Lake Sturgeon in the foreseeable future.  Furthermore, the application of genetics is especially useful for long-lived species like Lake Sturgeon, as actual increases in population size might not be readily observed for numerous years.  Most importantly, these types of genetic studies can be applied to other species and habitat restoration efforts around the world, as part of long-term monitoring efforts that track the actual effectiveness of these restoration efforts.  Or, as Dr. Welsh nicely summarizes,

Marranca, J. M., A. B. Welsh, and E. Roseman. 2015. Genetic effects of habitat restoration in the Laurentian Great Lakes: an assessment of lake sturgeon origin and genetic diversity. Restoration Ecology 23:455-464.