Animals have to deal with a variety of factors that influence their daily lives. These factors can be grouped into those that relate to living things, or biotic factors, and physical, or abiotic, factors. In particular, studies of abiotic factors have emphasized the role of temperature in face of climate change, and how animals will respond to predicted changes in temperature. Typically, animals can only survive in climates that meet their particular needs. For example, most amphibians are found in damp environments that are close to water, as they need to keep their skin wet to breath across it. They also need access to bodies of water to reproduce. Therefore, you would expect to find few amphibians in the desert. 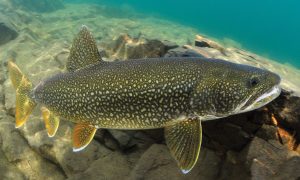 Most fish also require very specific environmental conditions to thrive. However, climate change has rapidly adjusted many of the abiotic factors critical for fish. Many fish vary their behaviour seasonally, requiring environmental cues to tell them what they should be doing. As ecosystems adjust in response to climate change, the behaviour of fish within these ecosystems will likely also begin to change. To understand how ecosystems are responding to climate change, long term studies of the effects of annual variation in temperature patterns on ecosystem function must be assessed. 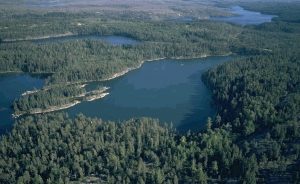 Figure 2. The Experimental Lakes Area. Photo by University of Guelph.

To address this question, researchers from the University of Manitoba tracked a population of Lake Trout (Figure 1) in the Experimental Lakes Area in Canada (Figure 2) over an 11 year period. The water depths that trout occupied were monitored year-round using acoustic telemetry, and water temperatures were tracked continuously using a series of data loggers. To determine what trout were eating over the course of a given year, stomach contents were assessed and tissue samples were taken to analyze carbon isotope patterns. The types of prey that an animal consumes is reflected in their carbon isotope patterns; by comparing these patterns to their various prey, the researchers could determine what the trout had been eating. Lastly, once a year fish were captured and measured to assess their yearly growth rates.

Figure 3. Seasonal range of Lake Trout and the prey accessible during these times. Photo from Guzzo et al., 2017.

Trout changed the locations where they fed seasonally (Figure 3). In the spring and fall trout spent the majority of their time feeding near the shore, where prey are more abundant. Trout also had the most food in their stomachs during the spring. However, in the summer, warm temperatures at the surface of the water acted as a physical barrier to trout, such that they could not feed in the littoral zone. Instead, trout were forced to feed in the open water where prey are more difficult to locate. Across the 11 year study period, the duration of the cool, spring temperatures, and therefore the time that trout were able to feed near the shore varied considerably. In years where trout were able to occupy the littoral zone for a longer period of time prior to temperatures rising, growth rates were higher and trout were in better condition. Overall, the feeding behaviour and nutritional status of trout was influenced by the length of the spring temperatures, and this duration varied across years.

Understanding how animals respond to climate change is of growing interest as global climate patterns continue to change rapidly. Studies such as this are necessary to predict how animal populations, and even entire ecosystems will be affected by climate change.

Guzzo, M.M., Blanchfield, E., Piccolo, P.J., and Rennie, M.D. 2017. Behavioral responses to annual temperature variation alter the dominant energy pathway, growth, and condition of a cold-water predator. Proceedings of the National Academy of Science of the United States of America. 114: 9912-9917.