How’d you like to spend Christmas on Christmas Island? To many of us during this time of year in the northern hemisphere, with our cold toes and grey skies, a warm tropical vacation is pretty alluring. However, for most organisms, where they spend Christmas (and the company they keep) is usually a consequence their evolution, rather than a yearning to get away from the snow and Mariah Carey’s “All I Want For Christmas Is You” playing on every radio station.

Coral reefs bordering the Pacific and Indian Oceans have some distinct differences in fish community compositions. However, it is not always clear whether those differences can be attributed to biogeography (geographic location and evolutionary history), or to localized regional effects such as fishing pressure and small-scale habitat variations. Scott Bennett at the University of the Balearic Islands and his colleagues traveled to Christmas Island (as well as the Cocos Islands and Rowley Shoals; Figure 1) to learn why these places have such different species compositions. 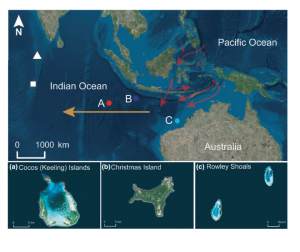 Figure 1. Locations of each reef and locations within the Indian-Pacific Ocean biogeographic intersection. Figure from Bennett et al. (2018).

While on their “working vacation”, the researchers gathered a bounty of data on fish communities at the three reefs, which all have very different geologic histories and unique fish community structures. They measured the effects of biogeography (geologic history, isolation, distance from mainland) and local factors (coral cover, fishing pressure, exposure to waves, lagoon size), to explain the variations they saw in species diversity and abundance in each reef community.

Overall, the researchers found that 53% of the variation in reef fish community structure could be explained by differences in the geologic context of the islands. When they focused on each isolated reef site, the lagoon size also explained much of the variation in fish community structures. However, fishing pressure only explained 5.2% of the variation in fish community structure, and other factors like wave exposure did not explain any significant variation. Interestingly, they found that Christmas Island lacked some of the most iconic and charismatic species, such as the Humphead Maori Wrasse (Cheilinus undulates) and the Black Tipped Reef Shark (Figure 2), but were present on the other two reefs. They believe their absence is due to the lack of a lagoon-like system on Christmas Island, which is a feature on some islands that only form under certain geologic conditions. From these results, they concluded that geologic history and isolation have the greatest importance when explaining differences in reef fish communities of the tropical Indian and Pacific Oceans, rather than local factors like fishing and reef conditions. As a result, the researchers argue that consideration of geologic and evolutionary histories should be part of management plans for these sensitive ecosystems rather than putting too much focus on local factors that may have little to do with the structure of biological communities.

Figure 2. A few representative species from this study that can be found on the Cocos Reef and Rowley Shoals but were noticeably rare on Christmas Island. They include the Humphead Maori Wrasse (Cheilinus undulatus; Right; fishesofaustralia.net.au) and the Black Tipped Reef Shark (Carcharhinus melanopterus; Left; wikipedia.com Creative Commons License).

So there you have it; while we have the luxury of choosing where we spend the holidays (and the rest of the year as well), most fish don’t. In fact, it turns out most fish are tied to their homes through very deep evolutionary and geologic histories. Thankfully for them, however, radios don’t work underwater so they won’t be tortured by the endless parade of Christmas-themed ‘Muzak’ that we are forced to listen to each holiday season.