Centers of human population are often built along rivers and their floodplains due to convenient access to drinking water, trade routes, fishing, and irrigation.  As a consequence of increased urbanization, rivers and their floodplains have undergone dramatic changes over the last few centuries. Intensive land-use practices have led to altered floodplain drainage, armored river banks, and dammed waterways.  These extreme changes to freshwater habitat have consequently impacted river-dwelling fishes.  For example, Raymond Morgan and Susan Cushman at the University of Maryland conducted a study in 2005 in which they linked high levels of urbanization with fewer species and lower numbers of fish.

Some of the challenges facing fish in urban streams are stormwater runoff, wastewater drainage, and habitat loss, all of which can lead to lower diversity and abundance in fish assemblages.  The combined factors that ail streams and rivers draining urban areas have been aptly coined urban stream syndrome.  As we grapple with the effects of urban stream syndrome on fish, this raises an important question: can people and fish coexist in big cities?

Researchers at the Liebniz Institute of Freshwater Ecology and Inland Fisheries and the Free University of Berlin recently published a study examining juvenile fish densities in response to habitat rehabilitation. They conducted their study in wave-protected areas of riverbank habitat designed to provide refuge for juvenile fish in the River Spree and Teltow Canal in Berlin, Germany.  The researchers’ goal was to see if habitat rehabilitation by improving sites along the river bank to emulate natural slow-moving eddies where juvenile fish could be protected from boat wake would increase fish diversity and abundance at those sites.  The researchers sample sites between 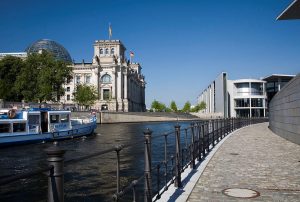 The River Spree in Berlin, Germany is one of the sites examined in this study on juvenile fish responses to habitat improvement projects. Source: © Jorge Royan / http://www.royan.com.ar, CC BY-SA 3.0 https://commons.wikimedia.org/w/index.php?curid=22546591

May and September of 2009.  They found negligible differences in juvenile fish densities compared to control sites which were representative of typical channelized bank structure.  What was more important to fish abundance than the type of habitat along the bank were factors like oxygen levels and vegetation density.  Sites that hosted the habitat rehabilitation projects were more densely vegetated, which reduced the flow of dissolved oxygen into the sites, thereby reducing overall fish abundance.  The species that dominated the rehabilitation sites were two ubiquitous and environmentally tolerant species, roach (Rutilus rutilus) and perch (Perca fluviatilis). Abundances of rare species were generally low and did not differ between sites.  The researchers concluded that the habitat rehabilitation sites were not enough increase juvenile fish densities in the urban waterways studied.  What is perhaps more important for promoting higher fish diversity and abundance, is managing the growth of aquatic plants which tended to deplete the oxygen at sites where aquatic plant growth was high.

The revelation that simply providing habitat rehabilitation to urban streams may not be enough to improve the quality of fish communities is disappointing, but research like this is important for providing proper guidance to habitat rehabilitation projects.  Waterways afflicted with urban stream syndrome have been fundamentally altered from their undisturbed states and it would be rash to think that alleviating one symptom could be a cure-all for restoring natural fish assemblages.  However, this research highlights the importance of another important environmental factor, rapid aquatic plant growth, to fish species living in urban spaces.

Weber, A., and C. Wolter. 2017. Habitat rehabilitation for juvenile fish in urban waterways: A case study from Berlin, Germany. Journal of Applied Ichthyology 33:136–143.