Removing aquatic vegetation is not desirable for juvenile largemouth bass

Macrophytes (aquatic vegetation) are used by many fish species as juvenile nursery habitat and refuge from predators. Lakes in the American Midwest are characterized by abundant macrophyte communities with many being privately owned. In many of these lakes, landowners remove macrophytes by chemical or mechanical methods. Research regarding the effects of macrophyte reduction on fish populations is lacking, creating a knowledge gap when it comes to regulation by state and federal agencies. 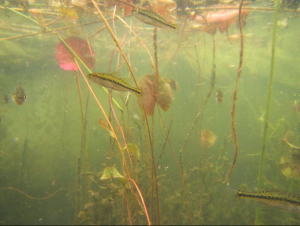 To study this effect, researchers constructed twelve in-lake experimental enclosures along shoreline habitat. Densities of low macrophytes (~3% coverage), edge (~40% coverage), and high (~60% coverage), were measured before choosing enclosure sites and maintained once a site was chosen (Figure 2). Juvenile largemouth bass were added from July to September 2014 at an appropriate density identified in previous literature. At the end of each one-month experimental period, juvenile largemouth bass lengths and weights were measured and the fish were euthanized and frozen for stomach content analysis. Habitat was also assessed, specifically macrophyte coverage, water quality and available prey to identify potential differences in growth of juvenile largemouth bass between enclosures. 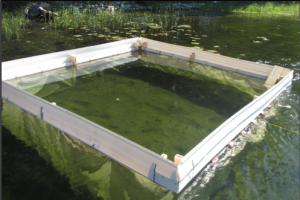 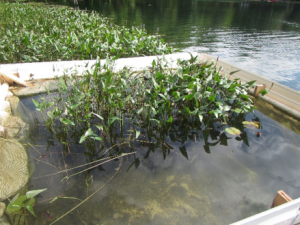 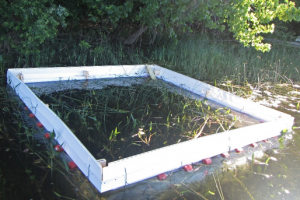