Catherine Johnston’s interest in ecology and fisheries research inspired her to pursue a Master of Science degree at the University of Maine studying how the recent removal of two dams might open up critical spawning habitat for endangered shortnose sturgeon (Acipenser brevirostrum). When the Veazie and Great Works dams were constructed (in 1900 and 1912 respectively) nearly 1000 miles of habitat was inaccessible for eleven different species of sea-run fish. Through the Penobscot River Restoration Project, 14 km of ancestral spawning grounds for the sturgeon have been reopened. However, one of the questions that Johnston has explored through her research was how much of this newly opened habitat could be suitable for spawning sturgeon today. 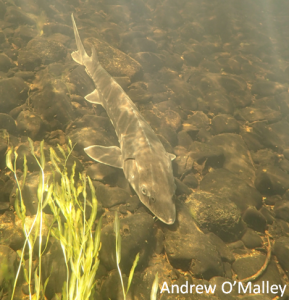 Shortnose sturgeon spend part of their lifecycle in freshwater and part in marine systems. Their distribution ranges from the St. Johns River in Florida to the St. John River in New Brunswick, Canada. Through barriers to critical habitat (dams), fishing pressure, and habitat degradation, the shortnose sturgeon has experienced substantial population declines. Reopening of freshwater habitat through the process of dam removal and river restoration is one step towards increasing the potential for recovery of this species.

“Because they spend time on the river bottom and are rarely seen, shortnose sturgeon are unappreciated by most people. I loved having the opportunity to spend time on the river catching them to implant acoustic tags. They are impressive to handle and they really do look prehistoric. Each individual has unique qualities like the coloration of their scutes and it was always fun to recapture individuals and to figure out their history.” 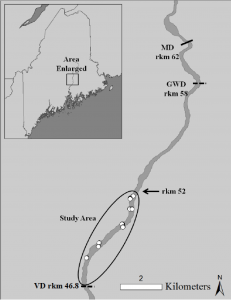 Johnston’s research blended hydrodynamic simulation with field-measurements to predict the distribution and amount of suitable spawning habitat located within the Penobscot River in an area upstream of the former Veazie Dam (see Figure 1). Hydrodynamic models are tools for describing the movement of water in a system such as a river. Field-measurements for features such as discharge, depth, and bottom substrate allows for verification of the model outputs. While both river discharge and temperature levels appropriate for shortnose sturgeon are observed annually within the Penobscot River, spawning of shortnose sturgeon within this river system has not be recorded. The location of spawning sites is strongly influenced by three variables: depth, velocity, and bottom substrate. Johnston used the hydrodynamic modeling program River2D to simulate river conditions over a range of discharge rates and predicted habitat suitability using a Habitat Suitability Index (HSI) based on these three variables. The HSI reflects characteristics on a scale from 0 to 1. HSI categorizes habitat as high suitability (0.7-1), moderate suitability (0.4-0.69) and low suitability (below 0.39). Johnston then created visual representations of the HSI for the area of river being studied. These maps can then be used to plan future surveys in the area (see Figure 2). 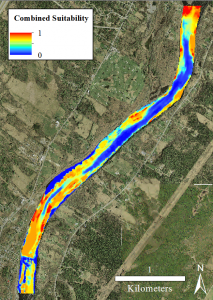 Spawning of shortnose sturgeon in the Penobscot River has never been recorded, yet in fall 2015 individuals were confirmed to be able to access the newly available habitat after the dam removal. In other northern rivers, shortnose sturgeons have been observed overwintering in areas close to spawning grounds. Overwintering behavior has been documented in the Penobscot in areas adjacent to suitable habitat identified by the model.

“The results of my habitat suitability research indicate that, if shortnose sturgeon move into the study area during the spring, they will find usable habitat for spawning. This work can serve as a starting point for understanding the quality of habitat that was made available by the PRRP dam removals.”

Monitoring of adult movements and spawning will be vital for gauging the restoration of this endangered species. Tagging adults and surveying for eggs and larvae is critical in this process. The habitat suitability model provides an important tool in determining the most likely locations for observing spawning and spawning success.

“In the future, researchers can use similar methods to study other reaches in the Penobscot to predict habitat suitability. Habitat suitability maps can be used in planning field sampling; targeting areas predicted to offer suitable habitat for spawning can maximize the likelihood of collecting eggs and larvae to confirm that shortnose sturgeon have begun to spawn in the river.” 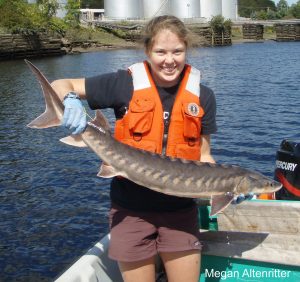