Personality cult: Do fish sort into habitats based on personality?

Stream restoration projects typically increase the complexity of stream habitat. At their most basic, restoration projects add materials such as boulders and tree root wads to the streambed that slow down the water and provide refuge, nurseries, and feeding zones for the stream’s inhabitants. Complex habitats make it harder for fish to see each other, resulting in smaller territories and greater numbers of individuals. In contrast, fish that live in open habitats where they can see each other more easily exhibit bold and aggressive behaviors (Figure 1). When an individual animal exhibits measurably consistent behaviors across a variety of contexts, it is defined as having a personality.  Researchers Kathleen Church and James Grant from Concordia University in Montreal wondered if juvenile Atlantic salmon (Salmo salar) exhibited personalities, and if habitat complexity favored particular personalities. “I have always been interested in conservation and behaviour, especially of fish, and for this study I wanted to combine the study of fish personality with conservation,” said Church.  They predicted that a fish captured from an open habitat would maintain a bold, aggressive personality even if placed in a complex habitat, and that fish captured in open habitats which had bold personalities would have higher growth rates. 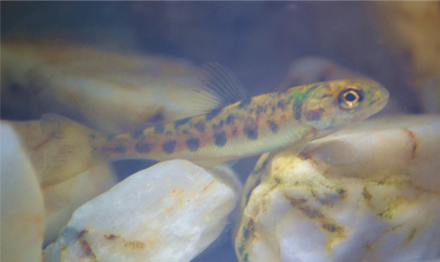 To test their predictions, the researchers snorkeled Catamaran Brook in New Brunswick, Canada and captured young of the year (newly hatched) Atlantic salmon (Figure 2). For each capture location, they visually measured the complexity of the habitat. The snorkeler measured how far they could see in every direction before the view was obstructed by a boulder. In complex habitats, the snorkler could only see a short distance underwater. The scientists held the fish in bins on the streamside while they marked them with unique color combinations (see green mark on salmon in Figure 1) and constructed enclosures in the stream. By conducting the experiment in the stream rather than in the lab, they hoped to reduce any potential interference in the fish’s natural behaviors. The enclosures contained either open habitat (few boulders) or complex habitat (many boulders). 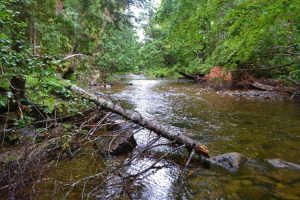 Figure 2. The study area in New Brunswick, Canada. According to researcher Kathleen Church, “It was an amazing experience to conduct this study in the pristine and beautiful natural habitat of Catamaran Brook.”(photo credit: K. Church).

The researchers placed six fish in each enclosure and conducted observations for 11 days. The habitats were changed halfway through, so each fish was exposed to both habitat types during the experiment. During the trials, the researchers stood outside of the enclosures and recorded locations and movements of the fish (Figure 3). They also conducted personality tests on a subsample of the fish by introducing objects into the enclosures: a small rubber worm, a mirror, and model predators (a brook trout, Salvelinus fontinalis and a fishing spider, genus Dolomedes) to test for three personality traits: neophobia (fear of new things), aggression, and boldness. They measured how close they could get the object to the fish before it sought refuge, how far it swam to get to refuge, and how long it took to emerge from the refuge. Then they composited the behaviors into three categories: activity/aggression, avoidance, and site attachment. 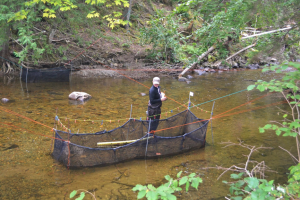 While the researchers found that the salmon had measurable personalities, they did not find a relationship between habitat complexity and personality. Rather, they found that the type of habitat in the enclosure significantly affected behavior in ways that were consistent with previous findings. Fish in complex habitats were less active and aggressive, and showed more avoidance and site attachment than fish in open habitat enclosures (Figure 4). Of the three personality types, site-attached fish grew the most. This may have been an artifact of the enclosures, as these fish grew the least in the wild. 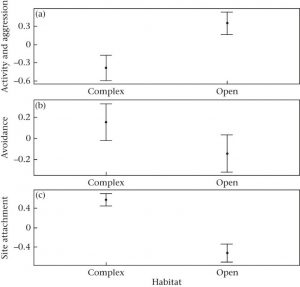 Though the results were contrary to their expectations, Church is satisfied with their findings. “I was surprised to find that the fish did not sort into habitats based on personality, and relieved to find that stream restorations are not likely to select for particular personality types.” Stream restoration projects that create more complex habitats with lower visibility help to decrease territory size and aggression, which fosters higher densities of fish. This study provides a fresh perspective on the benefits of stream restoration.