For most fish, the world is a dangerous place.  They are constantly at risk of being eaten at all stages of their lives.  In response to predation, fish have evolved many different kinds of defensive adaptations and strategies including the sharp spines of puffer fish, the sliming abilities of hagfish, and camouflage in flounders (Figure 1).  However, these adaptations cannot help a fish that has yet to hatch.  Egg predation accounts for a high percentage of total deaths in many fish species.  For some species of freshwater fish, survival past the egg stage can be as little as 1 or 2 percent (Dahlberg, 1979).  As a result, survival in the egg stages is incredibly important for maintaining healthy populations. 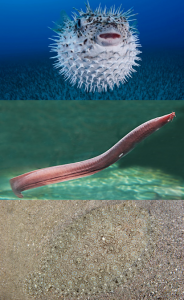 The Great Lakes is a heavily invaded ecosystem, hosting dozens of non-native predators which native fish did not evolve defenses against.  As a consequence, spawning fish leaving behind their eggs provide a veritable buffet for non-native predators.  Some species of Great Lakes fishes such as lake sturgeon (Acipenser fulvescens) spawn on rocky reefs where their eggs fall into the nooks and crannies in the cobble where they are protected from predators. 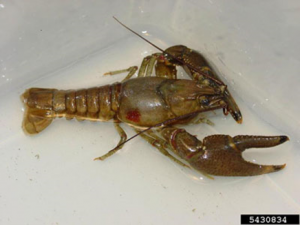 Figure 2. A rusty crayfish, an aggressive invader in the Great Lakes. They are easily identified by the rust colored patches on their sides and orange tipped claws. Photo source: www.michigan.gov.

The team collected eggs and sperm from spawning adult lake sturgeon, artificially fertilized them, and placed them into experimental tanks where they could manipulate the conditions inside (Figure 3).  The tanks was divided into three sections to hold the three types of substrates they tested: sand, gravel, and cobble in order of smallest to largest.  Lake sturgeon eggs were randomly dispersed across the three substrates.  Crayfish were then placed inside the tanks and could move freely across the different substrate types.  They ran the tests with 5, 10, 15, and 30 crayfish in the tanks to understand how changing predatory densities affects egg survival.  Finally at the end of a 48 hour trial they measured the body width of each crayfish so they could correlate body size to predatory activities such as eating eggs, hiding, or searching for eggs/hiding spots.  At the end of each trial they emptied and cleaned the tanks and searched for any uneaten eggs.  They repeated the experiments 16 times, collecting data using 9600 individual eggs and 225 crayfish. 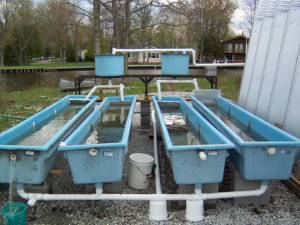 I asked Dr. Forsythe if anything his team found surprised them. He responded, “I had worked with crayfish before this study and so I was well aware of their awesome chemosensory abilities. However, the speed by which rusty crayfish found and consumed eggs across all three substrate categories was incredible. It was like my kids eating movie theater popcorn with extra butter!” However, the researchers cautioned that these laboratory experiments should be followed up by field experiments to affirm their observations because crayfish might behave quite differently in the wild compared to a confined tank.

This research underscores the importance of cobble and gravel reefs to ensuring egg survival for lake sturgeon.  It also emphasizes a need for integrative management in conservation, which focus on not only habitat but other issues as well like invasive predator control.  This study is just one of many that point towards the merits of adopting a whole-ecosystem approach for conservation planning.

Dahlberg MD (1979) A review of survival rates of fish eggs and larvae in relation to impact assessments. Marine Fisheries Review 41:1–12.