Humans have major impacts on the environment around them. Some of these impacts are obvious and we are reminded of their presence on a daily basis (e.g. garbage bins). However, some of these effects are less obvious, and many of us may not even be aware that they exist. For example, there are many energy sources that are pitched as being “green” and are thought to have few effects on the environment. One such source is windmills. Not only does the physical construction of windmills cause habitat to be destroyed, but windmills also present a threat to birds and bats; especially when placed on migratory routes. While most people are familiar with windmills that are built on land, offshore windmill farms are becoming more popular. However, it is not clear what effects these farms are having on aquatic wildlife. 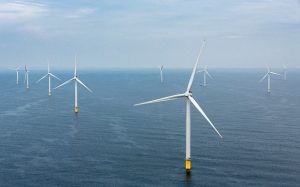 Offshore wind farms can pollute the aquatic environment around them by producing noise. Underwater noise pollution may cause fish to become stressed, but it is unknown whether noise pollution created from offshore wind farms is a source of stress in fish. One of the easiest ways to assess stress in fish is by measuring cortisol. Cortisol is an important hormone that regulates several key processes, including feeding, growth, and metabolism. However, when fish become stressed their cortisol production increases and extended periods of stress have serious negative effects, such as reduced growth. There is a lot of interest in assessing how these farms are affecting fish. For example, the government of the province of Ontario, in Canada has been fined $28 million as a consequence of halting construction of windmill farms since 2011 amidst uncertainty about potential environmental impacts. 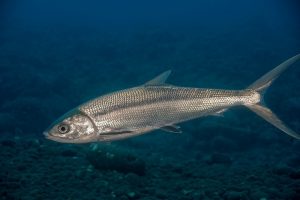 To assess this, a research group based out of Taiwan investigated whether noise pollution from offshore windmills causes stress in milkfish (Figure 2). Milkfish are an economically important fish in this region, contributing to both aquaculture and commercial fisheries. Groups of fish were kept in floating cages and exposed to either high levels of underwater noise, low levels of underwater noise, or ambient levels of noise. Underwater noise was created artificially by playing underwater recordings taken from an offshore wind farm in Sweden. To determine whether noise pollution caused fish to become stressed, blood samples were collected after 1, 3, and 7 days of exposure and cortisol levels were measured. Fish behaviour was also observed to see whether stress was associated with changes in behaviour.

Fish experiencing high levels of noise had the highest levels of cortisol, indicating that these animals were stressed. However, fish exposed to low levels of noise did not have elevated cortisol levels, indicating that fish may have a threshold tolerance to noise pollution from offshore windmill farms. Therefore, regulations limiting the levels of noise produced by such farms may minimize their effects. Interestingly, the researchers did not observe any behavioural differences between fish exposed to different levels of noise. This emphasizes the importance of investigating how animals are being affected internally, and not just assuming that they are fine because they appear to be acting normal.

As the global population continues to increase, global energy requirements will also increase. Therefore, we need to create safe and efficient ways to meet these requirements. However, it is important not to overlook how these innovations will impact wildlife in order to minimize negative effects on the environment.

Link to News Article about offshore wind farms in Ontario