Hydroelectric power is one of the cleanest energy sources available.  Washington State is the United States’ leading producer of hydroelectric power, which generates about 75% of the State’s energy.  Although it is a renewable and a comparatively clean power source, hydroelectric projects can have significant environmental impacts on aquatic organisms and their habitats.

Dams in a river can block migrating animals from reaching areas that are important to their life cycle, such as spawning or feeding grounds.  This can lead to something called habitat fragmentation, a phenomenon in ecology in which an organism’s habitat is divided into small discontinuous patches either through natural or human-caused processes. When a watershed becomes too fragmented by damming projects, both the number and amount of different organisms occupying the watershed tend to decline and the quality of the natural area degrades.  This can lead to losses in ecosystem services, functions of an ecosystem we benefit from, such as fishing or recreation.  In many cases organisms with specific regional and cultural importance suffer as a result. 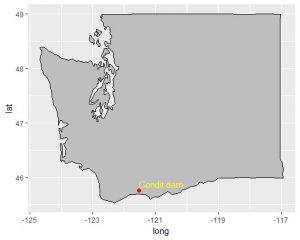 Figure 1. Location of the Condit dam in Washington State.

The Condit Dam was a hydroelectric dam constructed in 1913 and was a complete barrier to migrating Pacific lamprey and other fish until it was removed in 2012.  Dr. Jolley and his team estimated lamprey larval abundance before and after the dam removal by taking samples of the larval population using backpack electrofishers (Figure 2).  They calculated the probability of detecting lamprey using their sampling method and refined their approach until they reached 80% confidence that when they did not find any larvae, none were actually present.  In this way, they could be highly confident that their sampling method was accurately sampling the population at the site. 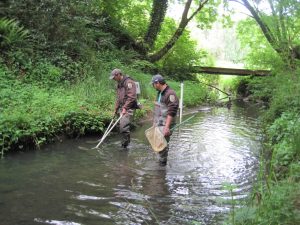 downstream from the dam (Figure 3).  After the dam was removed, lamprey were found in four locations above the dam removal site where they were previously absent.  This indicated to the team that natural recolonization of the White Salmon River was happening just a few years after the dam’s removal.  I asked Dr. Jolley about his reaction to finding Pacific lamprey:

“We had captured a number of a very small lamprey which were likely age-0 or age-1 fish in the mainstem White Salmon River but they were too small to visually identify.  We totally figured those were the resident non-migratory Western Brook Lamprey but we always sent off our genetic fin clips for fish that small.  It was months later when I got an e-mail from our collaborating geneticist.  I said ‘No Way!’.  We quickly pored through our records to triple-check everything for errors but I wanted to be completely positive about this.  Turns out they were Pacific lamprey – I smiled a lot that day.” 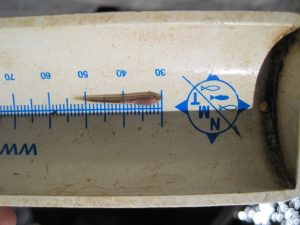 Additionally, lamprey were not found at the river’s mouth prior to dam removal but the researchers noticed that after the dam was removed, new habitat of fine sediment was formed at the river mouth and larval lamprey were found there.

The work done by Dr. Jolley and colleagues adds to the abundance of literature on the positive conservation impacts of dam removals.  On the project Dr. Jolley said:

“This was a large dam removal.  There are many, many small dams and passage barriers to Pacific Lamprey out there.  It would be great for the lamprey to remove some of these.  At times we just need to get out of the way and the lamprey will figure out the rest.”

Allowing natural recolonization of areas by removing unnecessary impediments can greatly improve conservation efforts for organisms such as Pacific lamprey, even in cases where their migrations have been blocked for nearly a century.

Jake is a graduate student at the University of Toledo studying aquatic invasive species management.  You can follow him on Twitter @JakeFishtad.