Fish are a vital component in the diets of many northern Canadians; therefore, it is critical to ensure that the habitats these fish are produced in are healthy, and the fish themselves are safe for consumption. One stressor on these habitats is the biomagnification of mercury in food chains. Activities such as mining and fuel combustion emit mercury which is disproportionately deposited in northern areas due to atmospheric patterns. Mercury is a toxic heavy metal that is taken up by organisms at the base of the food chain, and is increasingly concentrated as those organisms are consumed by small fish, then large fish, and then possibly by humans. This increasing concentration through the food chain is called biomagnification. Health Canada sets the limit for safe consumption at 0.5 ppm, above which symptoms such as memory loss and difficulty with sensory systems could occur.

Different type of aquatic habitats could be expected to vary in their mercury content due to biogeochemical processes that occur in sediment. When a fish migrates between different habitats during their life cycle, interpreting their mercury concentrations as being attributed to just the habitat they were captured in can be misleading. Research conducted by Meghan K. Carr and her colleagues (2017) in the Slave River Basin of the Northwest Territories explored how mercury biomagnification differed between the Slave River, Delta, and Great Slave Lake habitats. To better understand the mercury uptake that was experienced by each fish in their respective habitats, Carr and colleagues measured stable isotopes throughout the food chains. They used the lesser known sulfur isotope ratio (δ34S) because it has a greater range of values in freshwater prey items than the traditional carbon (δ13C) and nitrogen (δ15N) isotopes.

The researchers began by characterising the isotope ratios at the base of the food chain (algae, macroinvertebrates), as well as small prey fishes such as shiners (Notropis spp.) and suckers (Catostomus spp.). But it was the larger fishes which were of interest because they are a large component of the diets in northern communities. The delta is used by 24 fish species for feeding, spawning, as a nursery, and as a migration corridor between the river and lake. The researchers focused on northern pike (Esox Lucius; title photo), walleye (Sander vitreus; Figure 2), lake whitefish (Coregonus clupeaformis), and inconnu (Stenodus leucichthys). 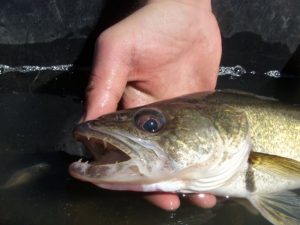 Biomagnification of mercury is impacted by the physiology of fishes such as how fast they grow and how efficiently they use energy from their prey. Inconnu have high lipid content in the flesh which may have diluted mercury to levels even lower than expected. Large fish residing in the river must expend energy to maintain their position against flow. This takes energy away from growth in body size which could reduce overall mercury concentrations. Being able to take the full life history of fishes into account and quantify the mercury uptake they encounter in different habitats allows communities to be better informed about how to ensure their food sources are healthy.