Many times we focus on the negative impacts that anthropogenic forces have on the marine environment. And rightfully so: ocean habitats are changing faster than ever. But despite the uncertain effects from unknowns like climate change and ocean acidification, the animals and organisms in the marine environment have a remarkable way of adapting. One example is how fish have adapted to artificial or man-made reefs. 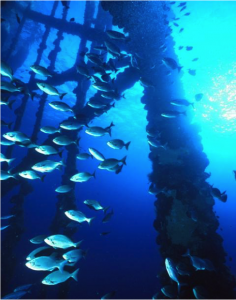 Sheephead below divers on a platform off of the coast of California. Source: Rigs-to-Reefs.

The National Oceanic and Atmospheric Administration (NOAA’s National Ocean Service) defines artificial reefs very simply: they are man-made structures that mimic some of the characteristics of a natural reef. Sunken ships (accidentally or purposefully) are the most common form of artificial reef, but bridges, lighthouses, and other offshore structures can also become reefs. Unintentional artificial reefs have experienced so much success that marine resource managers now construct them out of cinder blocks, wood, and even old tires. They’ve become popular habitats for soft and stony corals, fishes, and invertebrates. These structures have become popular attractions for commercial and recreational fishermen, as well as divers and snorkelers (NOAA, 2017).

Since 1984, the “Rigs to Reefs” program (a product of the National Fishing Enhancement Act) has converted at least 470 defunct oil platforms into permanent artificial reefs in the Gulf of Mexico. The Bureau of Safety and Environmental Enforcement (BSEE) has an interagency partnership with the National Marine Fisheries Services that manages the program, and they are responsible for the permitting and placement of offshore facilities, and also conduct studies with participating universities or the oil and gas industry. According to the Coastal Marine Institute, a typical eight legged structure can provide home to somewhere between 12,000-14,000 fish. Smaller four-legged structures provide up to three acres of habitat for hundreds of different marine species (BSSE, n.d.)

And the habitation and success of artificial reefs is not just occurring in the Gulf of Mexico. Oil platforms off the coast of California have been dubbed as “among the most productive fish habitats globally.” A 2014 study by Jeremy Claisse et al found that oil and gas platforms off the coast of California have the highest secondary fish production per unit area of seafloor of any marine habitat that has been studied (as of 2014). This was about an order of magnitude higher than fish communities from other marine ecosystems such as estuaries (Claisse et al., 2014). 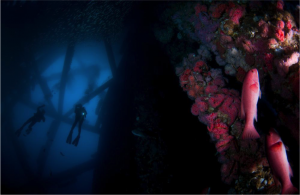 Although not every obsolete structure can be used to make a reef, there are significant benefits to those that are. For example, a significant amount of fuel is saved on transporting and disposal of structures, and enhancement of fisheries for individual states. The reefs provide food, shelter, habitat and increased biodiversity, which make for a more productive ocean (BSSE, n.d.).

With so many unknowns about the future of the oceans, artificial reefs can be a strong reminder of the resiliency of the ocean habitat to look at the how species have adapted to alien structures in their environment. Artificial reefs are proof that with a little help and scientific ingenuity, marine ecosystems can turn lemons into lemonade.

Bureau of Safety and Environmental Enforcement (n.d.). Rigs to Reefs. Retrieved from https://www.bsee.gov/what-we-do/environmental-focuses/rigs-to-reefs

NOAA. (2017, October 10). What is an artificial reef? Retrieved December 4, 2017, from https://oceanservice.noaa.gov/facts/artificial-reef.html