Living Inside the Cisco Layer

Northern Indiana is home to around 450 natural lakes created from the movement of glaciers across the landscape thousands of years ago. In the cold, oxygenated waters of some of these glacial lakes, a rare fish can be found spending its days feasting on zooplankton.  Cisco Coregonus artedi, members of the salmonid family, call these lakes home. Although Cisco have

historically inhabited 44 of these glacial lakes, today they are found in only seven (Donabauer 2015). As Indiana lakes represent the southernmost portion of Cisco’s native range, sedimentation and nutrient loading threaten the future of this species. Cisco serve as excellent indicators of water quality and fill an important niche space in Indiana lakes while contributing to genetic diversity (Honsey et al., 2016, Donabauer, 2015). Resource managers are working hard to learn more about Cisco and their habitats to conserve this species and protect important Indiana ecosystems.

Classified by the Indiana Comprehensive Wildlife Strategy as a representative species for Indiana glacial lakes, Cisco are known as a coldwater fish species, a designation carrying specific habitat constraints. They reside in a part of lakes known as the “Cisco layer”, in which temperatures stay at 20°C (68° F) or colder and oxygen is found at 3 parts per million or more. Cisco layers are typically only found in lakes with high water clarity, allowing sunlight to penetrate into the deeper regions of the lake. This sunlight penetration increases the size of the photic zone and stimulates growth of phytoplankton which then use photosynthesis to input oxygen into the deeper water where it is cold enough for the Cisco to live. 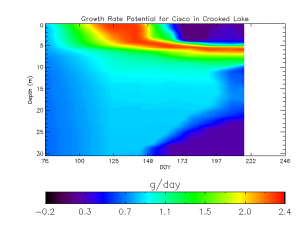 Poor land use practices in lakes’ watersheds can lead to eutrophication of Cisco lakes. While eutrophication can be a natural process, anthropogenic effects accelerato the changes while posing a major threat to Cisco as shallower lakes are more susceptible to warming, and decreased light penetration limits oxygen availability. Lake depth loss and water quality degradation are the end result of increased sediment and nutrient runoff from the land surrounding lakes (Honsey et al., 2015). Sediment can be in the form of sand, clay, and detritus, whereas, nutrients input is in the form of nitrogen and phosphorus. In Eve Lake, one of the remaining seven lakes home to Cisco, there is now only a five foot layer that meets Cisco habitat requirements (Donabauer 2015).

While the number of Cisco is dwindling it is true that these species have long been a native resident of Indiana lakes and act as an integral part of ecosystems. We can work to improve their habitats by limiting development in Cisco watersheds, while also decreasing sediment and fertilizer input through best management practices such as buffer strips, and continuing research on Cisco behaviors and tolerances