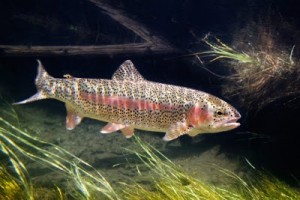 The year of 1894 marked the first time Rainbow Trout Oncorhynchus mykiss, a species sought out by anglers on all six continents except Antarctica, were introduced into the streams of Australia. Rainbow Trout are now present in the southern part of the country. Forty-four years after their introduction, a breeding and stocking program was developed for the trout as most populations were not naturally taking off in the Australian streams. Despite the benefits Rainbow Trout provide in terms of their beauty, fun fishing, and as a tasty dinner, these introduced species are known to have detrimental effects on native fish species as they outcompete them for resources and habitat, while also preying on them. These effects can also be exacerbated by anthropogenic influences such as increased sedimentation of waterways and habitat removal. In this research brief we will learn how William Sowersby and coauthors studied the behavior and habitat preferences of a native fish species, Riffle Galaxiid Galaxias arcanus, as they changed in response to the presence of non-native Rainbow Trout in an Australian river. Sowersby’s research is important in terms of conservation and protection of the native Galaxiids. 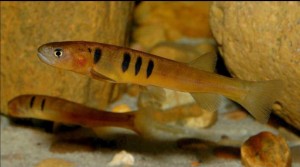 Past research has described a decline in the native Galaxiid species as they are particularly vulnerable to predation from Rainbow Trout. Both trout and Galaxiids are opportunistic feeders, therefore both species are directly competing with each other for food.  With this in mind, Sowersby and authors observed Cudgewa Creek and its populations of Rainbow Trout and Riffle Galaxiids. From their observations, three experimental questions were developed. The authors wanted to know if Riffle Galaxiids displayed a preference for substrate type, if they actively avoided the Rainbow Trout, and finally if the presence of the trout influenced Galaxiid substrate choice. A tank was created in which the Galaxiid had a choice between two substrate areas and a neutral zone (no substrate). The first area was their identified preferred habitat, cobble. The second was sand, the identified preferred habitat of the trout. In both areas a clear box was present in order to hold a rainbow trout. There were holes in the box to allow water flow and potential transport of chemical olfactory cues. The Sowersby and coauthors found that Riffle Galaxiids prefer cobble substrate compared to sand substrate both in the presence and absence of can Rainbow Trout. The Galaxiids did not employ any avoidance behaviors in the presence of trout when the cobble substrate was the environment, but would actively avoid the side with the trout when there was sand. 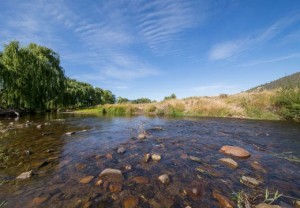 Although Rainbow Trout are not native to these southern Australian streams, they are now a part of the ecosystems and will probably continue to be stocked and bred to support recreational fisheries. Intelligent management actions are crucial for the Rainbow Trout in these situations. Control of actions such as channelization, floodplain drainage, and riparian zone need to be increased as well, as they contribute to the sediment load present in a stream or river that in turn leads to a decrease in cobble areas which are necessary habitats for Riffle Galaxiids. Better management of the surrounding catchment area and watershed could ensure the prevalence of Riffle Galaxiids and other freshwater species, therefore aiding in the preservation of biodiversity.