Intentional River Fragmentation: Can It Be a Good Thing for Fish?

“We’ve spent years convincing the public of the need to maintain connectivity in aquatic systems.  Now the challenge is to explain why there are exceptions to that paradigm.”  – F. Rahel

This quote reflects a unique but relevant perspective in fisheries management, as dam removal has been increasingly championed in recent years as a necessary approach for helping migratory fish populations.  Dam removal can be crucial for these populations by increasing connectivity to river habitat for spawning and rearing, habitat that was historically available before humans arrived on the scene.  Accordingly, large-scale dam removals in the United States have been accelerating; the San Clemente Dam (California), Elwha and Glines Canyon Dams (Washington), and Veazie Dam (Maine) were removed just within the last five years.  Encouragingly, migratory fish populations have shown quick responses in migrating upstream and utilizing previously unavailable habitat once these barriers are removed.

While there’s no doubt that restoring river connectivity can be hugely beneficial for migratory native species, can there also be cases where keeping dams is actually better for ecological systems?  A recent publication by Rahel (2013) says yes, and argues that intentional fragmentation (the purposeful act of disrupting aquatic connectivity) can serve as a conservation tool in its own right.

Rahel suggests there are four potential advantages to maintaining some degree of fragmentation in aquatic systems: (1) preventing the expansion of invasive species, (2) limiting the spread of disease, (3) maintaining the genetic purity of native fish populations, and (4) restricting fish from entering human-made ecological traps (e.g. irrigation channels). 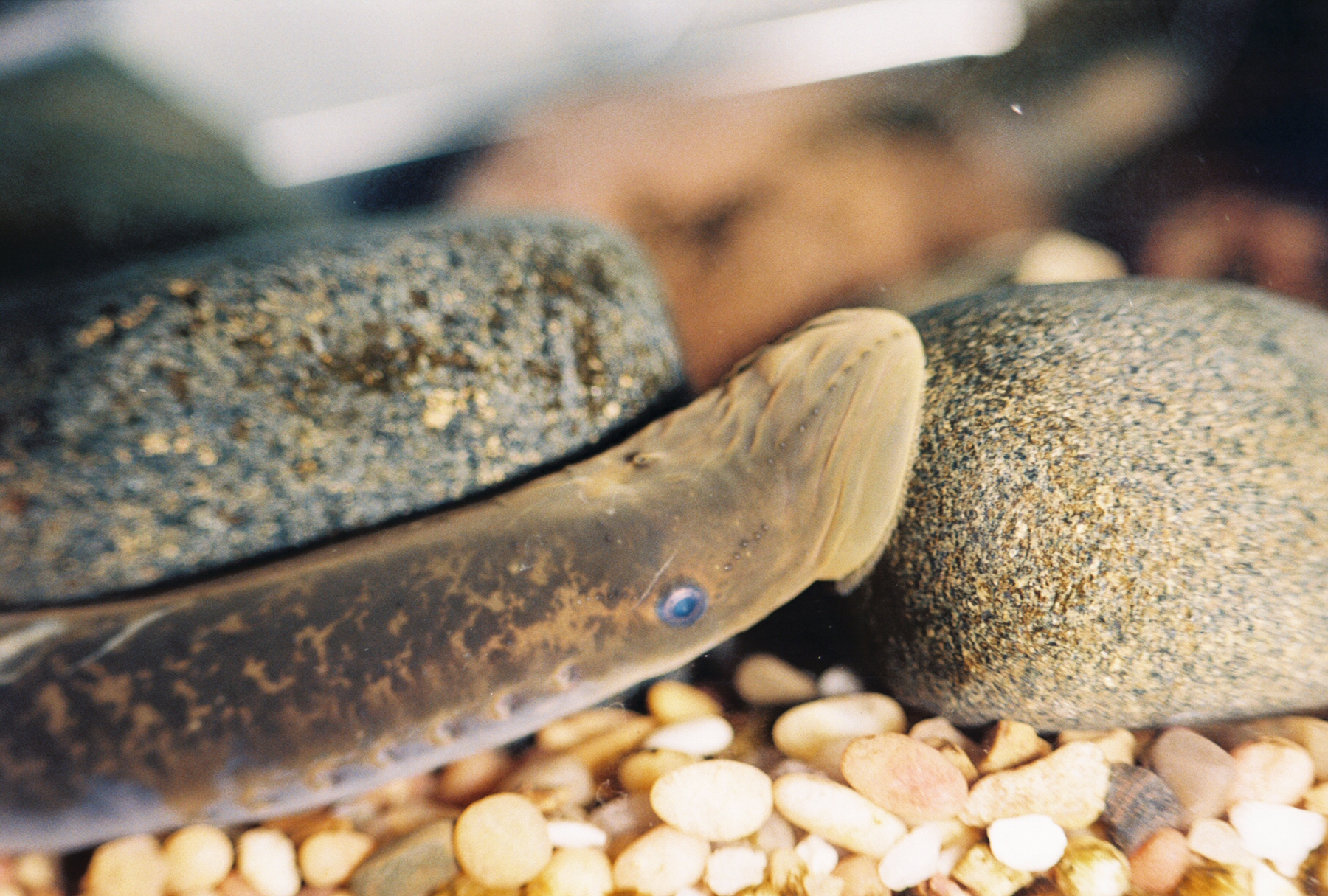 Focusing on the threat of invasive species, one characteristic common to these species is their rapid spread to new habitats and resulting disruption of existing biological communities.  Intentional fragmentation, according to Rahel, can stop invasive species from ever reaching these new habitats in the first place.  He notes that barriers have successfully blocked regionally-invasive Lake Trout, Common Carp, and Smallmouth Bass from accessing habitat occupied by vulnerable native species in states like Montana, Tennessee, and Arizona.

Now, let’s apply these small-scale examples to a practical case study of fisheries management on a regional scale: increasing connectivity in the Great Lakes’ watersheds and the spread of Sea Lamprey and Asian carp (Bighead Carp and Silver Carp specifically).  There is increasing pressure for dam removals in this region, in order to improve public safety, increase connectivity for migratory species, and restore natural river flow.  However, the Sea Lamprey is a significant Great lakes invasive species that relies on these same streams for both spawning and larval habitat.  Dams serve a crucial role in blocking upstream migrating lamprey spawners from accessing potential habitat, and are important enough to warrant a dedicated task force within the Great Lakes Fishery Commission’s (GLFC) Sea Lamprey Control program. 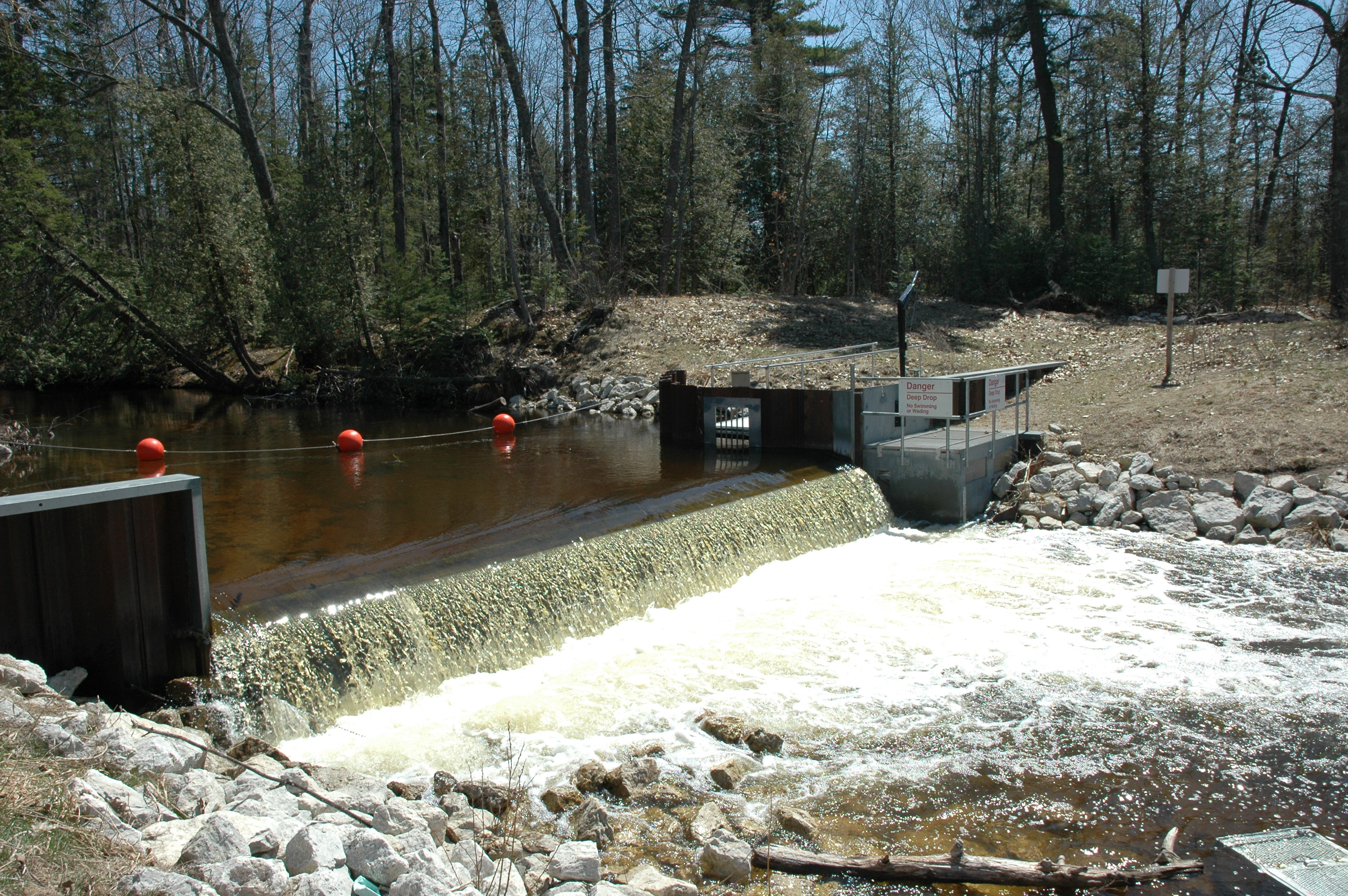 Asian carps are additional invasive species in the region; an electrical barrier in the Chicago Sanitary and Ship Canal is all that stands in the way of their Great Lakes invasion.  If they do bypass this barrier, there’s widespread concern that the fish species could dramatically disrupt the Lakes’ food webs due to their high growth and feeding rates. In this instance, dams on Great Lakes’ rivers may end up becoming even more important in blocking both Asian carps and Sea Lamprey from accessing upstream habitat.

In essence, dam removal decisions for the Great Lakes, or in any other region of the world, are all about evaluating trade-offs.  In addition to the always pressing social and economic concerns, Rahel argues for explicit consideration of the biological costs and benefits in barrier removals, in which managers carefully consider ecological trade-offs, identify an optimal level of connectivity, and select management actions accordingly (see diagram below). 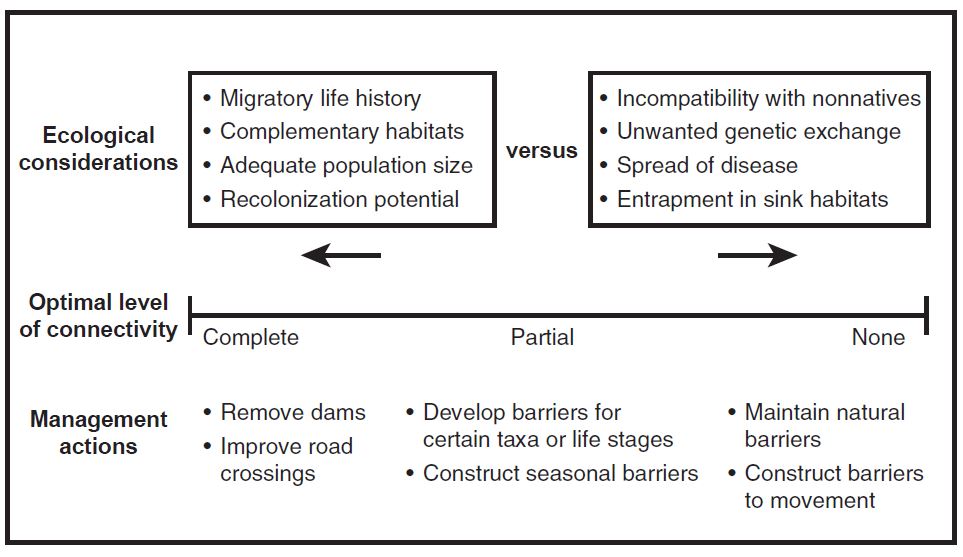 Or, to put it more formally, “the relative value of the connectivity versus the fragmentation of aquatic habitats needs to be evaluated on a case-by-case basis, through which the beneficial effects…are weighed against the potential detrimental effects on the movement patterns of native species”.