Dams are concrete roadblocks along an aquatic road; a perceptible challenge to habitat connectivity. Impounding rivers creates reservoirs, turning a natural river system into a lake. This can affect water temperature and flow regimes, which have implications for fish habitat and migratory patterns.
The National Inventory of Dams lists over 4,300 impounded water bodies >100 ha, or large reservoirs, within the contiguous United States. Krogman and Miranda (2016) reached out to local fisheries biologists associated with each one of these reservoirs to tap into their knowledge about fish habitat quality. The goal was to create a standardized, quantitative rating of reservoir fish habitat which could be used to prioritize areas for rehabilitation and conservation efforts.
The authors created an online survey asking biologists to rate the level of impairment on 52 items related to fish habitat quality within each reservoir. Examples of these items include “insufficient bank shading”, “harmful levels of agriculture in the surrounding watershed”, and “rapid water level change.” Using 1,299 responses, Krogman and Miranda were able to identify 12 major sources of habitat impairment in U.S. reservoirs. Based on these 12 sources, each reservoir was given a composite score, with high scores (maximum of 60) indicating candidates for major rehabilitation, whereas low scores could be targets for habitat preservation (Figure 1). 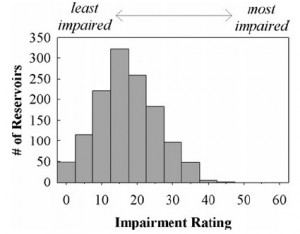 Figure 1. Distribution of habitat impairment ratings for 1,299 large US reservoirs. Ratings ranged from 0 to 46, with a possible maximum score of 60. Reproduced with permission from Krogman and Miranda (2016).

Each ecoregion of the US was characterized by a unique set of major impairments, and no ecoregion had better overall scores than another. Reservoirs in the Midwest may have had many impairments due to runoff from agricultural activities, whereas those in the South may stem from a combination of agricultural and forestry practices. Reservoirs in these two regions are functionally aging faster than reservoirs in other regions in the US due to their close ties to their watersheds. Extreme and untimely water level fluctuation was the major impairment identified in dry areas where water use conflicts between fish needs and human uses are even more constrained than is experienced in less dry areas.

The need for aquatic habitats to be improved was called for in The National Fish Habitat Partnership’s National Fish Habitat Action Plan. Effective habitat monitoring requires quantitative indicators which managers and scientists can use to grade existing habitats, and measure the efficacy of rehabilitation techniques. Rebecca Krogman comments “This research [Krogman and Miranda (2016)] represents the first round of developing a national dataset on reservoir fish habitat impairments. We are continuing to work on quantitative approaches to measuring reservoir fish habitat, seeking methods that can be used at a national scale.” This quantitative scoring system could be applied to large reservoirs in other countries where dam construction may be contributing to declining fish habitat quality.