Harmful algal blooms (HABs) are overabundant colonies of algae (simple aquatic plants) that have negative impacts on fisheries and humans. Algae thrive in warm, stagnant conditions with high nutrient availability (particularly phosphorus), so HABs are more common in waters that receive high nutrient inputs from fertilizers used in agriculture, golf courses, lawns and gardens. Even large bodies of water, like our oceans and the Great Lakes, can be impacted by HABs (Figure 1). HABs are troubling for two reasons: they deplete water bodies of oxygen and they produce toxins known to harm aquatic organisms and humans. The toxins that HABs produce cause beach closures, taint drinking water and contaminate fish and shellfish (Falconer, 1999; Weinke and Biddanda, 2018). 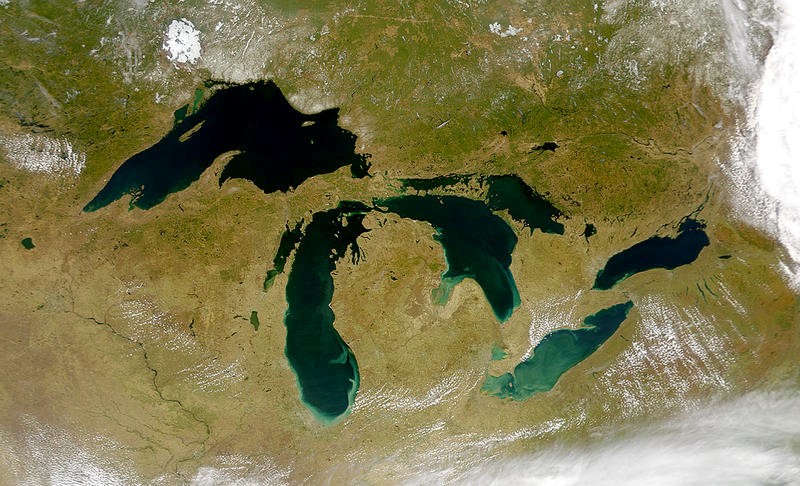 The depletion of dissolved oxygen from water is a condition called hypoxia. Algal blooms are a common cause of hypoxia. When dead algae decompose, the process consumes oxygen from the water, which is then made unavailable for other organisms. Although the tolerance range is species-dependent, low quantities of available oxygen can cause widespread mortality events since even fish need oxygen to survive. Areas where this has occurred are known as dead zones. For example, Lake Erie has a seasonally recurring dead zone that drastically changes its livability for fishes (Figure 2). 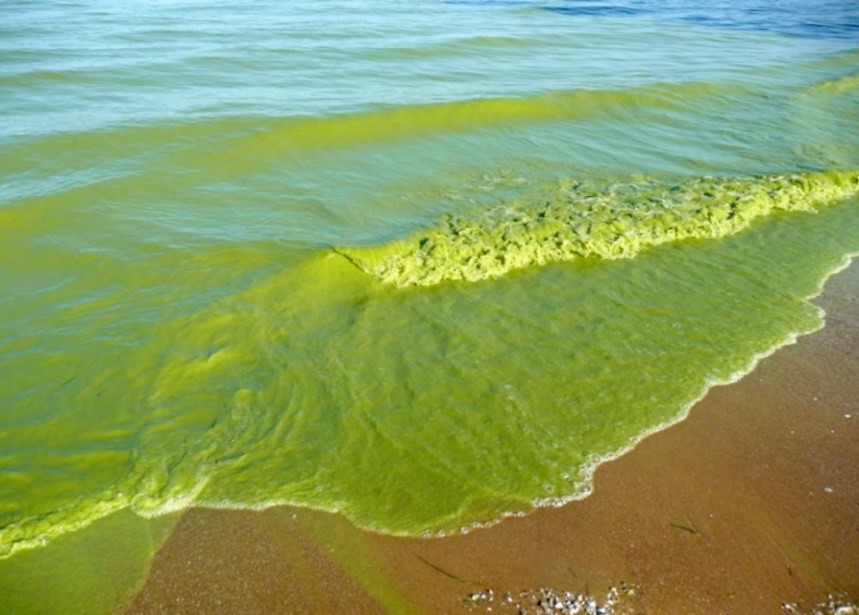 In addition to changing oxygen availability, some HABs are capable of producing toxins that impact fish and the humans that consume them. Alexandrium is a family of algae common along the eastern shore of North America that is associated with paralytic shellfish poisoning (PSP). Dinophysis is a family of algae that is associated with diarrhetic shellfish poisoning (DSP). Humans can contract PSP or DSP by consuming contaminated shellfish, but less is known about the impacts of Alexandrium or Dinophysis HABs on fish. A team of researchers led by Konstantine Rountos of St. Joseph’s College New York wanted to learn how these toxic algae impact fish behavior and survival.

Konstantine and her colleagues investigated the lethal and sublethal (e.g. growth, feeding and activity) effects of Alexandrium catenalla and Dinophysis acuminata toxins on embryonic and larval sheepshead minnow (Cyprinodon variegatus) and inland silverside (Menidia beryllina). These fishes are common forage species along the North American East Coast and their spawning season overlaps with the A. catenalla and D. acuminata bloom season. Moreover, they were selected because of their availability and previous use in HAB toxicity experiments. The scientists also used Gymnodinium instriatum, a non-toxic alga, as a control. They conducted their experiment during these early life stages because fish are most vulnerable to toxin exposure during development. Sheepshead minnow and inland silverside were exposed to the non-toxic control, each toxic algal strain individually and mixtures containing both toxic algae. The concentrations used were environmentally relevant and reflected dense HABs observed in nature. A variety of measurements were collected to assess the effects of the algae on behaviour and survival. Survival was quantified by monitoring fish daily and if an individual fish was not moving it was examined for a heartbeat using a microscope. Growth was assessed by taking size measurements at the beginning of the experiment and the end of the experiment. Grazing rates were defined as the number of algal cells consumed per hour. Finally, swimming activity was considered.

In general, fish exposed to toxin producing algae died significantly sooner than controls! Furthermore, fish that were exposed to either A. catenella or D. acuminata grew slower and were less active swimmers than those that were not exposed. Feeding rates and the type of toxic algae consumed was species-specific. Sheepshead minnow consumed more A. catenella and inland silverside consumed more D. acuminata. When mixed together, the two toxic algae species did not appear to be more toxic than either by itself.

Konstantine’s study showed that HABs can have both lethal and sublethal effects on fish. We can fight the formation of HABs by only using the recommended amounts of fertilizers when farming or gardening, thereby reducing the extra nutrients that will enter local water bodies. It is also important that wastewater is properly treated before re-entering the environment. Wastewater often contains an abundance of nutrients that algae can use to grow. Those of us with septic systems should have them well maintained to ensure there is no seepage into nearby lakes, ponds and rivers. Although naturally occurring, excessive algae can pose a serious threat to our aquatic ecosystems, particularly juvenile fishes, and by protecting our water we lower risks to human health.