High-Seas Stowaways: How the 2011 Tsunami in Japan Caused New Species to Wash Ashore on the U.S. West Coast

The devastating tsunami that struck the Tohoku Coast of Japan in March of 2011 caused destruction on a scale that is unfathomable to most people. A report published shortly after the tsunami found that nearly 20,000 people had died or gone missing, nearly 369,000 homes had been either totally destroyed or severely damaged, and the total cost of the disaster (not including clean-up costs) was estimated to be as high as 225 billion USD (Kazama and Noda, 2012). Eight years later, cleanup efforts at the Fukushima Daiichi nuclear plant are still underway. In recent years, however, debris from the tsunami has been finding its way far, far away from Japan, and along with it some oceanic travelers.

Floating debris, or flotsam, has long been recognized as important habitat for some species of high-seas fish. Natural floating rafts of debris, such as felled trees, typically provide refuge for some fish from predators on the open ocean. Rarely, however, is marine debris flung so far into the open ocean that it makes its way to another continent. Nevertheless, that is exactly what has happened in the aftermath of the 2011 tsunami.

Derelict fishing vessels, floating docks, and other collections of human-made structures started washing up on the U.S. West Coast as early as 2013, carrying with them a variety of marine invertebrates and fish never previously seen in the U.S. Let’s take a look at a few examples of the species researchers have been finding washed ashore from the other side of the Pacific Ocean: 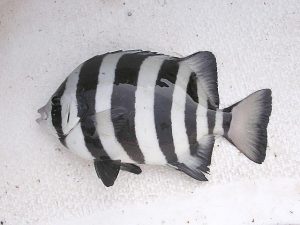 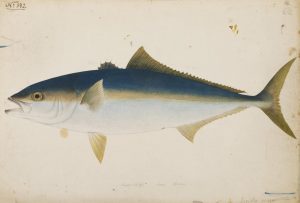 A watercolor drawing of a Japanese yellowtail jack. Wikimedia Commons.

These are just a few examples of the 289 or so species that have been found transplanted by the tsunami. The probability of any individual species arriving from the tsunami-swept debris becoming a problematic invader is low. However, as many organisms from marine debris continue to wash ashore, the probability of any one of them becoming an invasive species increases. As a result, it is in our best interest to continue monitoring these new arrivals and to study their potential impacts and pathways of spread. Research into these new arrivals could help us to predict their impacts and safeguard native marine ecosystems.