Estuaries are found where a river meets the ocean. It is a place characterized by mixing water of different physical and chemical properties. Physical properties of estuarian habitats depend on their contour, aquatic vegetation, elevation, and location (pelagic, marsh or shoreline). The mixing of chemical properties typically varies on a gradient, such as mixing of salt and freshwater resulting in brackish water. Many fish species rely on these habitats for nurseries and as adults. Fish populations within estuarian habitats can be impacted by a multitude of complex factors.

Humans have altered the Sacramento-San Joaquin Delta (Figure 1) into a unique system of multiple dams controlling flow of the Sacramento River, and keeping salinity levels relatively consistent. Human alterations have made channels uniform, resulting in less diverse habitat which is strained to support the diversity of native fishes. Most of the fish species which reside in the estuary are nonnatives, which further challenges native fish species. Researchers from the University of California, the USGS, and the Department of Water Resources collaborated to find out the answer to two main questions: how are fish populations affected by environmental conditions and how are fish communities affected by the aquatic vegetation present. 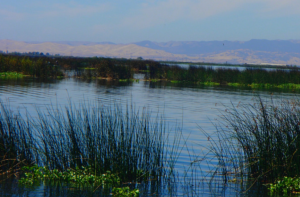 Young et al. selected the four largest Sacramento-San Joaquin Delta lakes representing the gradient of conditions found in the estuary (Figure 2). During 2010 and 2011, environmental conditions were recorded including temperature, dissolved oxygen, specific conductivity, and turbidity (the amount of solids suspended in the water). Fish were also sampled using a boat electrofisher in shoreline, marsh, and open water habitats. Fish lengths and species were recorded to determine community composition and abundance.  Emergent vegetation along the shoreline was visually estimated. Submerged aquatic vegetation was estimated in the same areas where fish sampling took place. 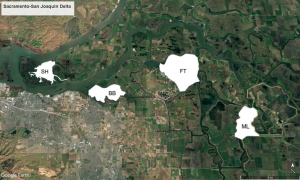 Largemouth bass Micropterus salmoides (Figure 3), golden shiner Notemigonus crysoleucas (Figure 4), and Mississippi silverside Menidia beryllina (Figure 5) were found in all estuary lakes. Sherman Lake had the highest salinity, with native fish species including tule perch Hysterocarpus traskii, hitch Lavinia exilicauda, Sacramento pikeminnow Ptychocheilus grandis, Sacramento splittail Pogonichthys macrolepidotus and Sacramento sucker Catostomus occidentalis. Sherman Lake’s fish community was the most unique among the other tidal lakes, with the highest percentage of native fish (49 %). Mildred Island was different from the other lakes but less so than Sherman Lake. Analysis of the fish sampling data from Big Break and Franks Tract showed the most similar fish communities. Fish communities remained consistent over time within the four lakes, and were influenced by salinity, turbidity and elevation as well as vegetation type, vegetation density, and whether the habitat was shoreline, marsh, or open water. Native fishes were generally correlated with high salinity and turbidity and lower elevation. Submerged aquatic vegetation did not determine the native fish community, and so other factors not explored in this study might explain native fish declines. However, Non-native fish, e.g. largemouth bass, were positively associated with submerged aquatic vegetation.

The results of this study indicates that vegetation impacts non-native fish abundance, signaling there may be potential for effective habitat restoration across the Sacramento-San Joaquin Delta to benefit native species. The specific environmental variables and habitat features needed to lead to effective restoration must be carefully considered before a decision can be made. Further research can build upon this study to determine how to best benefit native fishes, and inform managers deciding what steps to take regarding the San Francisco Estuary.