Artificial reefs are intentionally placed man-made structures that are constructed to provide habitat for fish and invertebrates. They are made of dense, durable materials such as scuttled ships and barges, decommissioned military vehicles, rubble or rocks (Figure 1). Artificial reefs are typically built to provide hard substrate in areas with a featureless soft bottom. In addition to enhancing fish habitat, they provide economic benefits because of their popularity as fishing grounds with commercial and recreational fishers, and as dive sites for SCUBA divers.

Though many artificial reefs are made from materials that were originally used for another purpose, some reefs are constructed with prefabricated structures such as reef balls (Figure 2). Reef balls are igloo-shaped structures made from concrete with a similar pH to seawater to encourage colonization by barnacles, mussels, soft corals, sponges and other sessile invertebrates. These are hollow structures with multiple holes of varying sizes to allow lobsters, crabs, shrimp and fish to use them as a refuge from predators. 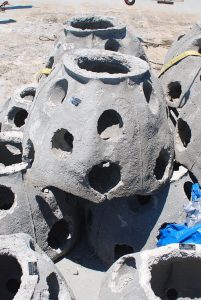 Figure 2. Reef balls before being deployed on an artificial reef. Source: Wikimedia Commons.

After the reef structure is deployed on a site, it does not take long for marine organisms to become established. Encrusting organisms including mussels and sponges will quickly begin to cover the reef material and crabs and lobsters will seek shelter in the nooks and crannies. Reef fish, such as black sea bass (Centropristis striata; Figure 3) and tautog (Tautoga onitis) along the Atlantic coast of the United States, will also take up residence in the cavities and crevices of the reef. Schooling baitfish and squid that congregate around the reef will attract pelagic predators such as bluefish (Pomatomus saltatrix), striped bass (Morone saxatilis) and various species of sharks and tuna. Summer flounder (Paralichthys dentatus) and other benthic predators will also hunt around the edges of the reef. Over time, the artificial habitat will resemble that of a natural reef. 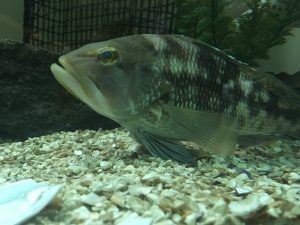 Reef fish are not restricted to the structure found on a reef site, they also frequently venture into the adjacent habitat. Many species associated with artificial reefs feed on prey living in or on the flat bottom habitat surrounding the reef. Dr. Mark Henderson and his colleagues from the Virginia Institute of Marine Science examined the movement patterns of summer flounder near an artificial reef made up of reef balls, construction debris, and bridge sections in the lower Chesapeake Bay. In June and July 2006, 40 summer flounder were captured near the reef and surgically implanted with acoustic tags to track their movements (Figure 4). The same was done with 80 additional flounder that were captured and released for a related study at two nearby sites. 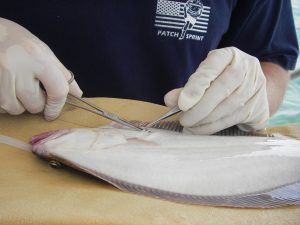 Figure 4. Surgical implantation of an acoustic tag into a summer flounder. Photo by Dr. Mark Henderson.

The researchers found that larger flounder generally occupied the waters closest to the reef structure and smaller flounder were often found along the edges of the reef. This may have been because of both the territoriality of the larger flounder and differences in foraging strategies between the two size classes. Larger flounder likely employed an ambush predation strategy where they laid still on the bottom and waited for their prey (Figure 5). Younger, smaller flounder typically feed on small invertebrates such as mysid shrimp but as they get larger, they begin to feed more on fish. Smaller flounder were found to move around more, especially during quarter moon phases when mysid shrimp may be most active due to the weaker tidal currents associated with neap tides. Neap tides occur during quarter moons when the gravitational forces of the sun and moon are perpendicular to each other, partially cancelling out the moon’s force on the tides. 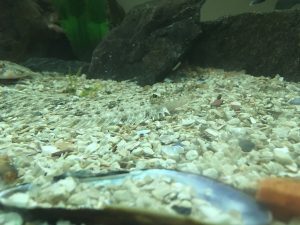 Typically, the benthic organisms closest to the reef experience higher predation rates than those located further away. When artificial reefs are constructed in close proximity to one another, the surrounding bottom habitat typically has a lower density of benthic prey than the bottom habitat around reefs that are farther apart due to increased predation. A team of researchers led by Claire Rosemond and Dr. Avery Paxton from the University of North Carolina at Chapel Hill studied the fish usage of reef structures compared to adjacent sand bottom habitats. They sampled 24 artificial and natural reefs in North Carolina’s Onslow Bay using SCUBA divers to survey the fish communities. Four, 30 meter transects were established at each reef to sample the fish on and off the reef structure.

They found that the reef structures had the highest abundance, biomass, and species richness of fish, with numbers decreasing across the sand bottom further away from the reefs with the most pronounced drop in abundance, biomass and species richness within the first 30 meters around the reefs. Using this data, the researchers estimated minimum buffer zones around the reefs. They recommended that the deployment of new reef structures should be avoided in these buffers to optimize the foraging areas on the adjacent sand bottom. A 60 m minimum buffer (30 m around an existing reef and 30 m around a new artificial reef) would encompass 77% of the fish utilizing the surrounding sand flats. A buffer of 120 m between reefs would encompass 97% of those fish and could attract pelagic predators that utilize the sand flats as they travel from reef to reef.

Many fish that utilize artificial reefs are not limited to the reef structure, they also feed in the adjacent soft bottom habitat. When strategically placed, artificial reefs can enhance marine habitat in areas with flat, featureless bottoms.