Expectations of Walleye vertical movement are not always reality

Fish use habitat depending on their needs. Typically, management of fishes relies on what habitats the fish are thought to inhabit. For example, sampling at a single depth can be biased if the fish actually use multiple depths.

Walleyes (Figure 1) are thought to become more active and move into shallower areas at night, especially when in clear water. Therefore, suspended gill nets (Figure 2) make sense when fish are likely to be in shallower waters. However, in recent years Lake Erie has experienced large algal blooms, especially in autumn. Algal blooms create hypoxic (no oxygen) areas as decomposition of the algae by bacteria consumes the oxygen in the surrounding water. This may deter Walleye from making vertical migrations at night, instead choosing to stay in deeper, oxygenated water. In addition, as lakes cool and mix in autumn 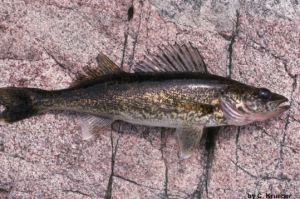 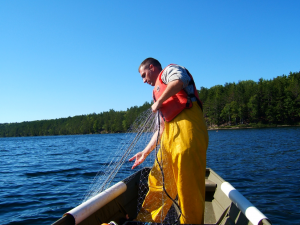 Figure 2. Researcher setting a gill net, designed to trap fish as they attempt to swim through the net. Photo credit: GLFC 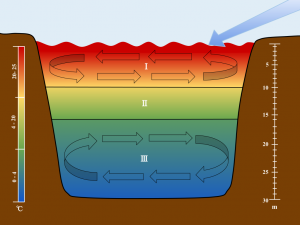 Figure 3. I. Epilimnion, II. metalimnion, and III. hypolimnion make up a stratified water column. The thermocline is the dark line between the metalimnion and hypolimnion. The hypolimnion is the hypoxic zone where fish cannot survive. Source: Wikipedia

To address Walleye vulnerability to sampling at different depths, Ann Gorman from the Ohio Department of Natural Resources and fellow researchers used acoustic telemetry to identify vertical Walleye movements. Acoustic telemetry (Figure 4) is usually used to track movements; however, the technology exists to also estimate depth of a given tagged fish. The Great Lakes Acoustic Telemetry Observation System (GLATOS) is a collaborative network of acoustic telemetry receivers used by many projects and agencies to track various fish species and produce better science and therefore management. This project used acoustic receivers spanning most of Lake Erie to track Walleye vertical movements, which is when fish change depths in the water column. In addition to movement, the researchers were interested in how gill nets typically used by managers effectively sampled Walleye. To compare size specific differences between bottom set and suspended gill nets, gill nets were set on Lake Erie from September through November. 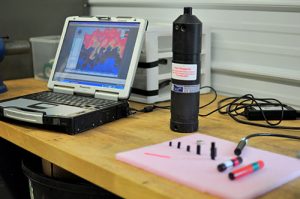 Figure 4. Acoustic transmitters in the lower right (inserted into fish) and receiver (detects tagged fish) is the black cylinder towards the middle of the image. Photo credit: GLFC

The researchers found that Walleye depths ranged from 0.3 to 46.4 m (~1 ­– 152 ft). Overall, this typically corresponded to the lower one-half to one-third of the water column. In addition, bottom set gill nets tended to catch larger fish than depth specific gill nets. This study highlights the blind spots in sampling design and suggests that large fish are typically underrepresented in surveys because of the use of suspended gill nets.

Although Walleyes are known to move from deep to shallow water at night, this study showed that fish in Lake Erie did not move to the extent found in previous studies. However, changes less than 7.0 m (23.0 ft) were common, and may represent an hourly preference in depth. Overall, the results suggest that large Walleye may be underrepresented in surveys because of their tendency to remain close to the lake bottom. This has overarching implications for management of Walleye in Lake Erie. Underrepresented large Walleye in management strategies could lead to overexploitation of large fish by anglers that managers are not accounting for in their surveys, which may prove precarious in a large fishery such as Lake Erie.