Could Michigan welcome a once-native fish back to its waters? 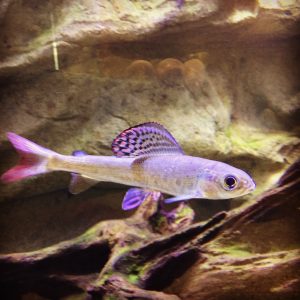 Arctic grayling (Thymallus arcticus; Figure 1), with their distinctive sail-like dorsal fins, are members of the salmon family and have a native range that begins in Arctic Ocean drainage basins and formerly extended as far south as Michigan’s Lower Peninsula. However, they were wiped out from the state in the 1930s due to a combination of factors including overharvesting, habitat destruction caused by logging, and interactions with nonnative species. Now, increasing focus has shifted to reintroducing and protecting native species within their native ranges and Arctic grayling is a potential candidate for reintroduction.

The State of Michigan and the Little River Band of Ottawa Indians are leading Michigan’s Arctic Grayling Initiative, an effort to restore Michigan’s native Arctic grayling populations throughout the state. More than 45 partnerships have been developed with agencies, local businesses, and universities. A total of $425,000 has been raised to support research and reintroduction efforts since the initiative’s inception in 2016. The ultimate goal of the initiative is to see the establishment of a self-sustaining population of Arctic grayling in Michigan for future generations to enjoy.

However, reintroducing Arctic grayling to Michigan will not be easy. The state has tried, and failed, several times in the past dating back to the 1800s to revitalize and then reintroduce Arctic grayling. This initiative must pay close attention to past mistakes and learn what they can from them to ensure this time will be a success. There are also several other challenges they face, for example the Arctic Grayling Initiative has still not met its target funding of $1.1 million (the total estimated cost of Arctic grayling reintroduction). And much more study is yet to be done to identify things like which watersheds will be best for reintroducing Arctic grayling, how to best manage the genetic make-up of their broodstock (fish used for breeding), and how grayling should be managed once they are reintroduced.

between a multitude of project partners. It is successful examples like this one, despite all of the hurdles, which make reintroduction efforts for fish like Arctic grayling in Michigan seem within reach.

The history of the Great Lakes is fraught with the role humans have played in its development. From a relatively simple, yet grand, post-glacial lake system to a highly altered ecosystem which hardly resembles anything it once looked like, the Great Lakes are undergoing continual change. From drastic changes in habitat, to introductions of invasive species, and the shifts in food-web dynamics that have all been directly or indirectly caused by us, we are undeniably a driving force for the lakes. Nonetheless, we also have a chance to restore the wild things that once inhabited these waters and possibly undo some of our past transgressions. Perhaps with a bit of imagination and hard work, we can regain some of what was lost both to the lakes and to us.