Seagrass beds are important marine habitats that provide many ecosystem functions. They help stabilize sediments and store carbon. They provide food for many marine species including endangered sea turtles and manatees as well as large fish. Seagrass beds are typically thought of as nursery habitat for juvenile fish providing both food and refuge. Typically, seagrass beds are uniform habitats offering little protection for large fish. Several species of seagrass however, may act as additional habitat for large coral reef fish.

Posidonia species such as P. oceanica (commonly known as Neptune grass or Mediterranean Tapeweed) found in the Mediterranean Sea, P. australis (known as Fibreball weed) found in the Indian Ocean, and Thalassia testudinium (known as Turtlegass) found in the Caribbean Sea may provide habitat for large fish under the right conditions. Posidonia may grow vertically and deposit sediments forming seagrass mats; sometimes, channels are formed in the mats via erosion. These channels can be quite large, 1-3 meters in height and up to 500 meters in length, forming an escarpment. Similar conditions can occur with Turtlegrass when erosion creates an overhanging wall of exposed sea grass roots. Seagrass escarpments or walls can be the result of natural processes such as hurricanes, tides, or wave action, as well as human activities (propeller scars, dredging, vessel groundings). Sometimes cave-like structures are formed along these escarpments. These caves may act as additional habitat for species that would otherwise only inhabit coral reefs.

These habitats and their use by large coral reef fish species were recently observed in Shark Bay in Western Australia by Oscar Serrano of the Centre for Marine Ecosystem Research at the Edith Cowan University in Australia and several of his colleagues. Serrano and colleagues observed multiple caves, some up to 1 cubic meter in size, throughout a mat escarpment. These caves were occupied by groupers Epinephelus coioides as well as by sea perches Psammoperca waigiensis, cardinalfishes Apogon angustatus and A. cavitensis, and bengal sergeants Abudefduf bengalensis. On other occasions, they have also observed scorpionfishes Scorpaena porcus and S. scrofa, other species of groupers Epinephelus marginatus and E. costae, cardinalfishes Apogon imberbis, brown meagres Sciaena umbra, seabreams Diplodus sargus and wrasses Labrus viridis, L. merula, Symphodus tinca – all species typically exclusively associated with Coral Reefs. 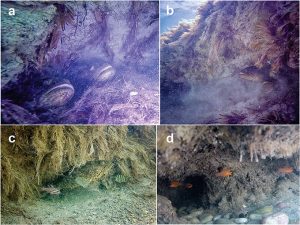 To date, the occurrence of these seagrass caves is thought to be uncommon. Further work is needed to determine the extent, ecological importance, and mechanisms of formation of these habitats, as well as how they may potentially enhance fish biodiversity and biomass, and provide refuge and foraging areas.