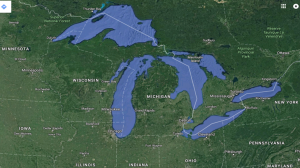 Flame retardant chemicals have been known to wind up in places they don’t belong; in the atmosphere, in lake sediments, and in the tissues of fish and other wildlife.  For this reason, a number of hazardous brominated flame retardant (BFR) chemicals were banned or regulated by the Stockholm Convention on Persistent Organic Pollutants, enacted in 2004. Phased out chemicals were quickly replaced by a new generation of BFRs claiming to be safer for humans and the environment. However, new research focused on the North American Great Lakes reveals that many of these next generation chemicals are also making their way into the atmosphere, lake sediments, fish tissues, and up through the food chain into the eggs of shorebirds that feed on fish. Amplifying the risk, phased out BFRs are still being detected in some environments, even though they are generally found in lower concentrations. Consequently, Great Lakes fish and wildlife can be exposed to both old and new generations of toxic flame retardant chemicals.

Brominated flame retardants are applied to many consumer and industrial products, from electronics to furniture, to reduce flammability. These chemicals can make their way into aquatic environments from landfill runoff, through wastewater, and  other pathways. In a recent study, University of Southern Illinois researchers collected tissues from common carp and largemouth bass at 58 locations across the Great Lake state of Illinois (Widelka et al. 2016). They found that tissue from all of the fish contained not just one, but seven different kinds of Polybrominated diphenyl ethers (PBDEs), a class of flame retardants that was taken off the market in 2004. In addition to the phased out PBDEs, new generation brominated flame retardants (TBCT, HBBZ EH-TBB, and BEHTEBP) were detected in 40-78% of fish sampled. Determining the exact pathway of BFRs into fish tissues is complicated as these highly mobile compounds can exist in gas, liquid, and solid phases, and are able to move between environmental sinks such as the atmosphere, water bodies, and animal tissues. 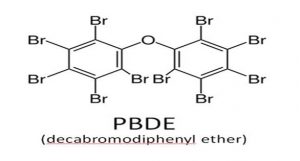 Researchers from the University of Buffalo modeled one pathway by which flame retardants can end up in Great Lakes fish tissues. Their work focuses on the transfer of contaminants up the food chain; mussels first absorb the contaminants from the lake sediments by filter feeding, the round goby feeds on mussels, and smallmouth bass feed on the gobies (Wallace 2015). The researchers predict that smallmouth bass are at higher risk of bioaccumulating BFRs in coming years, as they’re eating more and more mussel-munching round goby. The round goby is an introduced species to the Great Lakes and in some habitats their population is growing.  The smallmouth bass is commonly fished and eaten by humans, placing human populations at risk for exposure as well. BFRs can impair thyroid, liver, and kidney function as well as cause reproductive harm.

Deposition from the atmosphere into Great Lakes aquatic environments is another pathway by which fish, wildlife, and human populations could be exposed to both phased out and new generation BFRs. Using data from the Integrated Atmospheric Deposition Network (IADN), Liu (2016) and colleagues analyzed air samples collected from five locations across the Great Lakes between 2005 and 2013 for seven flame retardant chemicals. The IADN is a long term monitoring program that has measured organic pollutant concentrations in the Great Lakes atmosphere since 1990. The pollutants measured by the IADN include flame retardants such as PBDEs, PBEB, HBB, TBE, DBDPE, syn-DP, and anti-DP. Between 2005 and 2013, atmospheric concentrations of new replacement flame retardants (EHTBB, BEHTBP, and DP) increased across the Great Lakes. Those that were phased out or restricted (PBDEs PBEB, HBB, and TBE) decreased, but continue to be found in high concentrations in some locations, such as up to 1.8 pg/m3 PBEB at Eagle Harbor, MI. This exceeds concentrations measured from around the globe in the Arctic, East Africa, and China. 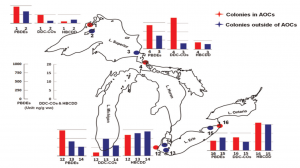 Fig. 3. Comparison on the arithmetic mean of Σ14PBDE, HBCDD, and Σ2DDC-CO concentrations in herring gull eggs (collected in 2012) between area of concern (AOC)
colonies and nearby non-AOC U.S. colonies (unit: ng/g wet weight).

A number of migratory and resident fish-eating birds rely on the Great Lakes for food, and can bioaccumulate toxic amounts of BFRs from eating contaminated fish. Herring gull eggs collected at 20 colonies across the five Great Lakes were analyzed for both phased out and replacement flame retardants by researchers at the National Wildlife Research Center in Ontario, Canada (Su et al. 2015). Herring Gulls consume a wide variety of foods, preying on fish, invertebrates, trash, carrion, other birds and eggs, and so are susceptible to BFR exposure from multiple pathways. The research team found 14 different types of phased out PBDEs present in one or more of the 115 eggs sampled. Concentrations of PBDEs were found to be 30% lower in 2012-2013 than when previously sampled seven years ago in 2006 and 2008. However, some PBDEs continued to persist in concentrations that exceeded lethal amounts, posing a threat to Herring Gull vitality. Three fire retardants currently in use (BDE-209, HBCDD and DDC-CO) were found to have increased between 2006 and 2013. Their results indicate that Great Lakes wildlife now face both classes of flame retardants, as the legacy of phased out chemicals overlaps with contemporary forms, and can bioaccumulate simultaneously through the Great Lakes food chains.

The Great Lakes are the largest source of freshwater on the surface of Earth, home to nearly 200 species of fish and over 3,000 other wildlife species. The aptly named ‘Great Lakes Solutions’, one chemical company that produces flame retardants, boasts a selection of 38 different kinds of flame retardants, many of them brominated, and available for anyone to purchase. The International Joint Commission published a report in November 2016, emphasizing that in order to effectively address these contaminants, governments need to control all steps in the product life cycle, from production through disposal. Such comprehensive action is required to uphold the 2012 Great Lakes Water Quality Agreement, that the Great Lakes should “be free from pollutants in quantities or concentrations that could be harmful to human health, wildlife, or aquatic organisms, through direct exposure or indirect exposure through the food chain.”