Lake Tanganyika, located in tropical Africa, is the continent’s oldest, deepest lake. It displays extraordinary biodiversity and provides habitat to many endemic species. Lake Tanganyika has provided up to 200,000 tonnes of fish per year to neighboring communities who rely upon this resource as a source of protein. In the past few decades, Lake Tanganyika has experienced increased fishing pressure, deforestation, increasing water temperatures, as well as fish and phytoplankton declines. Current climate projections indicate that temperatures in tropical Africa, and in many other parts of the world, will continue increasing. Determining the impacts of global climate change upon this diverse and sensitive ecosystem is key in ensuring the proper management and protection of Lake Tanganyika and its species.

To date, changes in tropical freshwater lakes in response to changing temperature is poorly understood. Ecosystem changes have not been well documented or monitored, yet the local population relies heavily on fisheries resources. To gain insight into lake-level responses to climate change, a group of researchers led by Andrew Cohen from the Department of Geosciences at the University of Arizona made use of lake sediment cores to obtain data on historic ecosystem dynamics. A long narrow tube is used to collect lake sediments, these undisturbed sediments can then be analyzed and provide a record of past ecosystem changes.

In Lake Tanganyika, as in many lakes, warming leads to stronger thermal stratification which in turn may decrease vertical mixing. Vertical mixing of the water column typically results in nutrient rich water being brought up to the surface where it may be used by primary producers (various algal species), increasing their abundance. Since these species form the base of the aquatic food web, increases in temperature that cause decreases in algal populations can result in declines in the other organisms that are part of the aquatic food web such as zooplankton, invertebrates, fish and their predators. Furthermore, increased thermal stratification may lead to changes in oxygen availability for many species. A lack of mixing may result in a larger low oxygen or no oxygen zone decreasing the availability of habitat for bottom-dwelling species.

To test these hypotheses and learn more about the impacts of warming on Lake Tanganyika, Cohen and colleagues made used of paleoecological data. They compared variations in fish fossil abundance to shifts in water temperatures and algal production before commercial fishing took place. They speculated that if fish population declines coincided with the introduction of commercial fishing, then fishing practices or overfishing may likely be the cause. Otherwise, if declines were observed prior to commercial fishing and coincided with temperature fluctuations, climate change may be the driving factor. 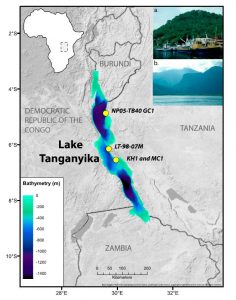 The research team chose three locations, two nearshore sites (NP05-TB40 and LT98-07M) and one deep-water site (MC1/KH1), where they collected sediment cores for analysis (Figure 2). Using various surrogate methods, they analyzed temperature, algal production, and abundance of pelagic fish and benthic invertebrates. To analyze temperature trends, they used published temperature records from a nearby site and a paleothermometer, called TEX86, to measure temperature from sediment cores. They found alarming rates of system-wide warming since the 19th Century. BiSi (biogenic silica) a type of mineral produced by diatoms, was used as a surrogate for algal abundance or primary production. Analysis of sediment cores revealed several patterns. During periods of warming, vertical mixing and nutrient delivery to surface waters was suppressed. As a consequence of low nutrient availability primary production was suppressed. These periods of elevated temperatures, low nutrient availability and low primary production coincided with low fish fossil abundance (Figure 3). Overall, pelagic fish species such as sardines showed large fluctuations in their numbers through time prior to any commercial fishing taking place. Benthic invertebrate abundances also decreased in response to increases in temperature for the entire time period. 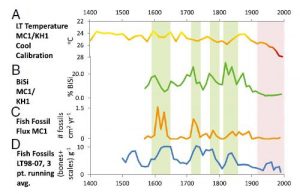 The research team concluded that while commercial fishing has resulted in overharvesting, particularly of large predators, declines in pelagic fish species were observed prior to the start of commercial fishing and coincided with periods of warming. This relationship between warming, primary production and fishery declines, was observed throughout the past ~1500 years. However, the unprecedented rates of warming since the 19th Century have resulted in much more drastic ecosystem changes and fisheries declines. Cohen states that “as a researcher who has worked for decades at Lake Tanganyika, I find the current rate of environmental change from climate as well as other anthropogenic impacts alarming.” Continued warming will only intensify these trends, including loss of benthic habitat as well as associated impacts upon fish, invertebrates and littoral organisms. Cohen and colleagues warn that “to sustain Lake Tanganyika’s extraordinary endemic biodiversity, the conservation community, cognizant governments, and international agencies must recognize these long-term trends in designing management plans. If fishery managers ignore ongoing reductions in the energy base of the pelagic food web, the susceptibility of this critical resource to overfishing will become even more acute.” In May 2017, a conference (African Great Lakes Conference https://www.greatlakesofafrica.org/) will be held in Uganda to discuss fisheries issues and other threats to Lake Tanganyika as well as all of the African Great Lakes.