Blinded by the light: Artificial light may affect reproductive cycles in fish

Many people take for granted their ability to control lighting conditions with the flick of a switch. In major cities almost every corner of every street is illuminated, even in the middle of the night (Figure 1). While this provides a feeling of safety for citizens who may be strolling home from the late shift at work, this unfortunately also affects wildlife living nearby. While we are able to pull our curtains shut if we are bothered by these lights, other animals do not have this luxury. As such, artificial light produced by streetlights and other sources can have major impacts on animals. 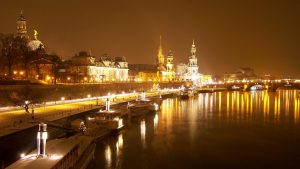 Many animals, including humans, rely on light cycles to inform them about their environment. Melatonin is a hormone that regulates daily cycles of sleep and arousal, and its production is largely regulated by light. When light levels are high, little melatonin is produced, while production increases when our surroundings are dark. However, electrical lighting can influence melatonin production and sleep cycles can become dysregulated. Melatonin not only regulates cycles of arousal in humans, but also in other animals, such as fish. In addition, many fish breed several times throughout the year, and many species synchronize their reproductive cycles with the lunar cycle. As such, hormones that regulate reproduction, specifically androgens and estrogens, often vary with the lunar cycle as well. It is currently not well understood how light pollution created by major cities affects hormonal cycles in wild fish populations. Therefore, a team of German researchers based out of Berlin set out to investigate this further. 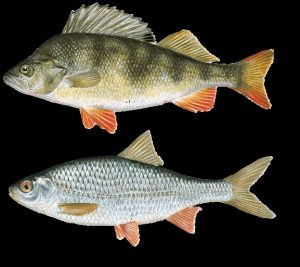 Researchers collected two regionally common species of fish, European perch and roach (Figure 2), from a nearby lake in a rural area. The fish were then transported to a rural field site 70 km north of Berlin, where light pollution is minimal. Groups of perch and groups of roach were placed into net cages within identical drainage ditches for a month. The banks of these ditches were either equipped with streetlights nearby, or no streetlights nearby. The experiment took place outside of the breeding season for both fish to avoid effects of reproductive status confounding their results. After a month had passed, blood samples were collected from each fish to assess how light pollution influenced hormone levels. Specifically, the researchers measured circulating levels of melatonin, 11-ketotestosterone (the major androgen in fish), and 17β-estradiol (the major estrogen in most animals).

Neither species displayed differences in melatonin levels due to light pollution, suggesting that normal daily biological rhythms may not have been influenced by the streetlights. However, the researchers state that the lack of difference may be a consequence of blood samples being taken during the half moon, which may have masked potential differences due to the high natural nighttime moonlight levels. On the other hand, the indicators of reproductive status seemed to be influenced by the light pollution in both species. Males and females of both species displayed lower androgen levels, while female roach and perch of both sexes had lower estrogen levels when exposed to artificial light. This means that the timing of reproduction may be influenced by light pollution, which could have dramatic effects on survival of young. Most species spawn when environmental conditions are optimal for their offspring to develop and survive. For example, many fish lay their eggs so that young emerge during the full moon, as the moonlight may allow predators to be more easily detected at night. If this timing is altered then the number of young that survive to maturity could decrease, and the population could suffer in subsequent years as a result.

Understanding the ways that humans are influencing natural ecosystems is critical. Even changes that may seem relatively minor, such as placing streetlights along a shoreline, appear to have potentially major effects on the animals that live there.