Blind cave fish after dark: what the mating habits of this peculiar fish can teach us about evolution

Fish are the most diverse group of vertebrates and can live in almost any habitat imaginable, including underground caves where nutrients and light are rare to nonexistent. Living in such a harsh environment requires substantial evolutionary investment. Scientists have struggled to answer how organisms evolve to live in inhospitable conditions. Do animals evolve special traits in response to extreme environments, or do they inherently possess suitable traits for extreme environments? Recent work by a team of researchers at the Paris-Saclay Institute of Neuroscience may bring us closer to answering this “chicken or egg” conundrum. 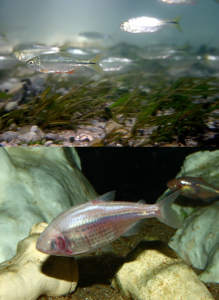 The team designed a clever experiment using the Mexican tetra (Astyanax mexicanus; Figure 1) which has two distinct forms: river dwelling (which can see) and cave dwelling (which are blind). The objective of the experiment was to observe the breeding behavior of both forms under identical light conditions.  The team hypothesized that if the river tetras (seeing form) mated during daylight hours then it is likely that the ability to carry out full mating rituals in the dark must have evolved in the cave tetras (blind form) in response to the environmental conditions. Conversely, if they mated during dark hours then it would suggest a ‘pre-evolutionary’ trait that may have advantaged their shared ancestor in colonizing cave environments.

To test their hypothesis, the scientists set up separate laboratory aquaria for captured river and cave tetras, exposed them to 12 hr light-dark cycles, and observed the fishes’ mating rituals. In order to continue observations during the dark hours, they recorded the fish using infrared cameras.

The researchers found that both the cave and river forms of the tetras displayed identical behaviors during reproduction. The males and females of both forms repeated the same swimming patterns and only mated in complete darkness.

According to the researchers, the matching mating behaviors in both seeing and blind forms reveals that the ability to reproduce in the dark is a ‘pre-evolutionary trait’, and may have helped the ancestors of the Mexican tetras survive after colonizing caves. This implies that the tetras were pre-equipped with the traits to succeed in caves, rather than adapting to the cave environment. The results of this study advances our understanding of evolution by providing an example of how some organisms can be ‘pre-adapted’ to fare better under certain conditions. The concept of a pre-evolutionary adaptation helps explain why fish can live in so many unusual places. The nocturnal activities of these little fish have helped shed a little more light on some big scientific questions.