Rivers are an important part of our way of life. They provide hydropower, drinking water, fishing, irrigation, recreational activities, and transportation, among other benefits. Rivers are often altered to enhance their ability to perform these services by practices such as dredging, course alteration, and building barriers and locks.

These alterations can affect the ability of fish to use rivers for both movement and habitat. Migratory fishes that use these waterways as “roads” from one critical habitat to another are especially vulnerable. For example, many of us are aware that several species of salmon migrate from open water into streams to spawn. If passage routes through these streams are hindered or impassable, fish reproduction can be disrupted, ultimately resulting in decreased recruitment and fewer fish in the next generation. This is true for other migratory fishes as well.

To date, many fish migration routes have become impassable or compromised due to human activities, negatively affecting abundances of important fish species. For example, in the 1970’s, researchers found that survival of wild Chinook Salmon migrating through the Snake River in northwestern USA decreased from 89% to 33% following the construction of dams (Raymond 1979). In 2002, Morita and Yamamoto demonstrated that habitat fragmentation caused by dams led to the loss of several populations of White-spotted Charr. 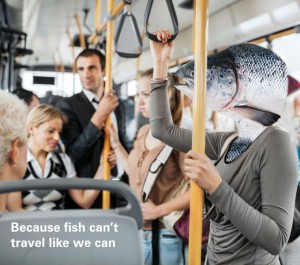 Reduced abundance of migratory fish species can be a problem for us too, because fishes are a major food source for many people around the world. For example, annual consumption of fish species threatened by anthropogenic habitat fragmentation in the lower Mekong river basin accounts for 47 – 80% of the total animal protein consumed (Dugan et al. 2010). Therefore, it’s important to find a balance between our reliance on rivers and waterways for purposes that result in alteration and the need for waterways that facilitate movement of migratory fishes.

World Fish Migration Day (WFMD) represents an emerging international effort to bring attention to the above issues with the intentions of raising awareness, sharing knowledge and ideas, fostering global and local collaborations, and planning for a future where waterways can be used effectively for both human activities and fish migration.

Looking to contribute, participate, or get involved in this global effort? May 21, 2016 marks the second WFMD, and organizers are looking for volunteers to plan, organize, and execute events around the globe to raise awareness about the importance of open rivers and free routes for migrating fishes.

For events that are already scheduled, possible event ideas, or for more information on WFMD, visit their website at www.worldfishmigrationday.com.

Morita, K. and Yamamoto, S. 2002. Effects of Habitat Fragmentation by Damming on the Persistence of Stream-Dwelling Charr Populations. Conservation Biology 16;5, 1318-1323.