A behavioural barrier to keep young fish out of risky environments

Rivers provide us with many important services, including hydroelectricity and irrigation. These services sometimes require physical 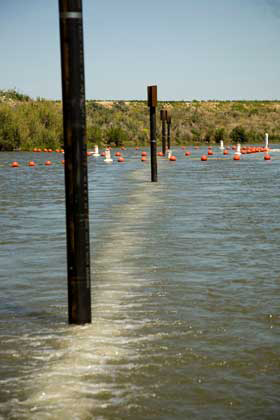 A surface image of a sound, bubble, and light barrier used to keep fish out of a target area. You can see bubbles breaking the surface along the line of the barrier. Image from http://deltacouncil.ca.gov/science-news/archives/2009-12-sound-air-and-light-barrier-keeps-chinook-out-of-old-river.phpc.

alterations to the river, such as the implementation of dams or changes to water flow. These alterations can impact fish that also use these rivers. Dams can impede fish migration and directly cause death for fish caught in turbines, and changes in water flow can increase migration time and indirectly decrease survival by increased predation and reduced food resources. Consequently, there is growing interest in using barriers to reduce the number of fish that encounter these dangerous alterations. While preventing movement of fish, physical barriers such as weirs or fences can also block water flow and may cause mortality if fish become stuck in the barrier. For this reason, researchers are beginning to test the utility of non-physical barriers to keep fish out of risky areas. A non-physical barrier uses behavioural stimuli, such as loud sounds, bright lights, and walls of bubbles, to deter fish from entering target areas (Perry et al. 2014).

A recent study by researchers from the US Geological Survey and Hydroacoustic Technology Inc. tested the utility of a non-physical barrier for keeping young Chinook salmon out of the Georgiana Slough in the Sacramento-San Joaquin River Delta (near Sacramento, California). Water flow in the slough has been highly altered for human use. Consequently, more fish die when migrating through this area compared to elsewhere. The researchers tested a bioacoustic fish fence (BAFF) that uses sound, bubble curtains, and flashing lights to deter young Chinook salmon from entering the slough and to encourage them to enter the less risky Sacramento River. They did this by setting up an array of acoustic receivers that record sound around the BAFF. They then collected young Chinook salmon and tagged them with tags that emit a very specific range of sound. These fish were released downstream of the barrier, and the researchers used the sound emitted by the tags to triangulate the location of each fish after it was released. 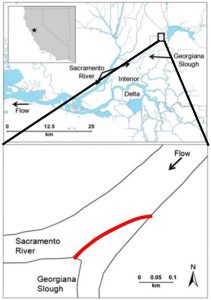 Figure 2 The research was conducted in the Sacramento-San Joaquin River Delta near Sacramento, California (top). The BAFF (red line) was placed to deter fish from entering the Georgiana Slough, and encourage them to enter the Sacramento River. Modified from Perry et al. (2014).

The BAFF reduced the number of young Chinook salmon that entered the Georgiana Slough. Fewer fish entered the Georgiana Slough when the BAFF was turned on compared to periods when it was turned off. However, the researchers also found that the BAFF was less effective when water flow was high. They suggest this could be because fish could not swim against the high flow to avoid the barrier, and were pushed across. They also point out that the location of the fish when it approached the barrier was very important in determining whether or not the fish crossed into the Georgiana Slough. Fish that swam along the shoreline on the same side as the slough were far more likely to enter it than fish that swam up the opposite shoreline.

Non-physical barriers, and particularly the BAFF, could work to deter fish from entering risky environments. However, environmental factors, such as water flow, and location of the barrier play an important role in the effectiveness of such devices. Further research on the role of the environment and fish movement would be useful to further develop these methods of fish deterrents. If they’re effective at keeping fish out of specific areas, they might also be useful in other areas of fish management, such as preventing the invasion of some aquatic invasive fish species!